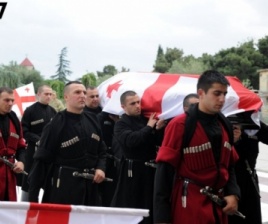 TBILISI, DFWatch–Eduard Shevardnadze was buried on Sunday with military honors at his residence in Krtsanisi, Tbilisi.

The former Soviet foreign minister and president of Georgia was honored by the speakers of parliament of Azerbaijan and Armenia, the Austrian minister of justice, the deputy foreign minister of Japan, former US Secretary of State James Baker, former German Foreign Minister Hans-Dietrich Genscher, the vice chancellor of Germany, former President of Estonia Arnold Rüütel and others.

“Eduard Shevardnadze was, quite simply, a wise and beautiful human being . . . and history will remember him favorably for his productive time on Earth,” James Baker said, remembering the Georgian leader’s political career and his friendship with him.

“He was a complex man, soft-spoken yet hard-nosed, known for doing what he thought was right,” Baker said.

The world needs leaders like Shevardnadze, Baker continued, people who have a capacity to look into the future and understand that views about the world will inevitably change.

“Leaders with the insight to determine the proper course of action needed to meet that future. And leaders with the determination and courage to make sure that it happens.”

“I am sorry and I mourn for the death of Georgia’s second president,” Georgian President Giorgi Margvelashvili said during the funeral ceremony. He recalled that abolishing the death penalty in Georgia happened with Shevardnadze’s involvement.

“A man born in a village was for decades governing Georgia. He became a politician of world significance, who had merits in withdrawing troops from Afghanistan, uniting Germany, changing the communist regime and forming a new reality in the world,” he writes.

Prime Minister Irakli Gharibashvili said that now when Georgia took a huge step in regard to getting closer to Europe, it is impossible not to remember the great role Shevardnadze played in this.

“He laid the groundwork for this process years ago. The forming of our pro-western course is connected to Eduard Shevardnadze.”

The funeral ceremony had speeches by guests, family, relatives and politicians and took place at Sameba Cathedral.

Justice Minister Thea Tsulukiani wrote in a blog post that Shevardnadze played a great role in changing the world. http://theatsulukiani.wordpress.com/2014/07/13/eduardshevardnadze/

The former president was buried with military honors at the garden of his residence in Krtsanisi, next to his wife Nanuli Shevardnadze.