Dzhioyeva regains consciousness, refuses to be sent away to Russia

Dzhioyeva regains consciousness, refuses to be sent away to Russia 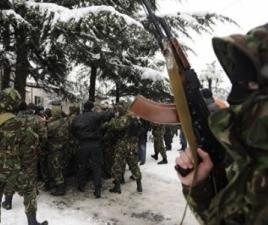 The winner of last November's cancelled election in South Ossetia was detained in her headquarters Thursday, one day before she had planned to hold her inauguration. Alla Dzhioyeva regained consciousness this morning after having suffered a stroke during the dramatic detention. (Photo: Interpressnews.)

TBILISI, DFWatch – South Ossetian opposition leader Alla Dzhioyeva has regained consciousness in a hospital in Tskhinvali. Doctors want to transport her out of the breakaway republic and to Russia, but she refuses to be moved.

It was just one day before she was going to hold her inauguration that the opposition leader was forcefully detained in her headquarters and suffered a heart attack.

Some believe her stroke was caused by a blunt trauma to the head by a rifle butt, but authorities deny this.

Last night was spent at the emergency department, and only this morning she regained consciousness, Russian and Ossetian news agencies report. Only her husband is allowed to be with her. She complains about pain over her whole body.

The doctor say there is no body traumas on her body. However Fatima Kokoeva, representative of the election headquarters of Dzhioeva says that the opposition leader lost consciousness, and then suffered a stroke because of blunt trauma to the head with a rifle butt.

“During the assault one of the security forces struck Alla Alekseevnu on the head with the butt, and she immediately lost consciousness,” she says.

The Ossetian Interior Ministry denies that this is what happened.

“We categorically refute rumors circulated that Dzhioeva was allegedly hit on the head with a rifle butt, which allegedly caused the internal bleeding,” Vesti.ru quotes Valery Valiev, head of the Interior Ministry in South Ossetia.

Others tell a different version. Vesti.ru quotes people closer to Dzhioyeva who say that the reason for her stroke was that she had a conversation with the man in whose home she had her campaign headquarters, head coach of Russia’s freestyle wrestling Dzhambolat Tedeev, who asked her to not hold her inauguration, scheduled for today, February 10. She had a phone call with him just before the breaking into the headquarters.

“He then as an ultimatum demanded to vacate the headquarters, located in his home. After this conversation, she became ill and was hospitalized in the republican hospital with hypertensive crisis,” Vesti Ru quotes one of its sources.

Previously, one of the opposition leader’s supporters advised her to call off the inauguration: Anatoly Barankevich, who is a former Defense Minister of South Ossetia and has served as a general in the Russian army. He strongly criticized the previous leader of South Ossetia, Eduard Kokoity, for not rebuilding the region after the 2008 war, but instead pocketing the reconstruction aid from Moscow, and threw his support behind Dzhioyeva.

But she didn’t, and in the evening of February 9, the day before the inauguration, an investigator from the Prosecutor’s Office of the region came to Dzhioeva’s campaign office with a subpoena for questioning her as a witness in a criminal case regarding attempts to capture government buildings in late 2011.

The former presidential candidate refused to follow the investigator. A few of minutes later, Russian and Ossetian media report, about 15 people in masks and camouflage fatigues broke into the building and forcefully took Dzhioeva with them, detaining several of her supporters too.

Today, acting president Vadim Brovtsev said he had to take these measures, because he judged Dzhioyeva’s plans and actions as an attempt to seize power by force.

Brovtsev, a Russian businessman who served as prime minster of the de facto republic since 2009, before he became acting president during the crisis in December, says that Dzhioyeva’s statement about her inauguration and her becoming the president is clearly a violation of the constitution and ‘is actually an attempt to call for violent seizure of power.’ 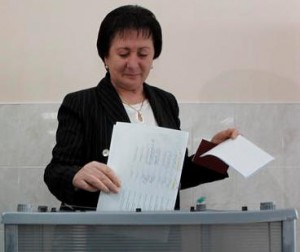 Alla Dzhioyeva is a former education minister. Here she is submitting her vote in last November's election. Preliminary results gave her a clear victory, but authorities declared the election invalid. (Official photo.)

“I take full responsibility for the attempt to suppress an anti-constitutional coup in the country; violation of the current laws of South Ossetia will be stopped by the strongest measures, the country will take additional measures to protect the rule of law, constitutional rights and the freedoms of citizens,” Ria Novosty reports him saying.

Russian media reports that the supporters of the opposition leaders are gathered in front of her headquarters.

The situation in the region started deteriorating after a run-off election for new leader November 27, which had Kremlin favorite Anatoly Bibilov and former education minister Alla Dzhioyeva competing against eachother.

Preliminary results gave the opposition leader Dzhioyeva a decisive victory, however the de facto Supreme Court of the region annulled the results after a complaint about violations, and scheduled new elections for March 25.

After negotiations, a compromise was reached, which would allow Dzhioyeva to run in the election March 25, but in mid January she withdrew from the agreement because some of the conditions had not been met by the other side. As the situation escalated, also her opponent, Anatoly Bibilov, refused to participate in the March 25 elections, which would therefore have to be held without the two most popular candidates.

Representatives of the opposition leader say they will seek the assistance from the international community.