Drivers on strike in Imereti

Drivers on strike in Imereti 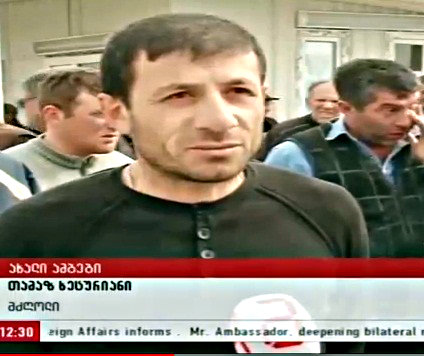 Tamaz Khetsuriani, one of the drivers on strike in Imereti. (Maestro.)

TBILISI, DFWatch–Problems are building for the local population as drivers on a minibus route between Zestaponi and Samtredia, two small towns in western Georgia, are on strike against a cut in their salaries.

The strike is especially causing problems for small scale vendors who use this form of transport to bring their goods to the market.

Journalists from the Imereti region, where the towns are located, report that drivers used to receive USD 15 daily, but a few days ago their salary was cut by USD 3 by their employer, Accord (Akordi) Ltd.

There is ongoing construction work of a new highway in the Imereti region, and the work is ordered by the same company, Akordi. The company’s representatives declined to comment. Construction of the highway started about two years ago.

“We demand to increase the salaries again and also remove unreasonable fines for each time tires are damaged or for any other stupid reason,” Tamaz Khetsuriani, one of the drivers said during Tuesday’s strike.

If their demands aren’t met, drivers plan to protest outside parliament in Kutaisi.

Drivers say representatives of the company’s management told them that if they do not agree to work with reduced salary, the company will hire new drivers.