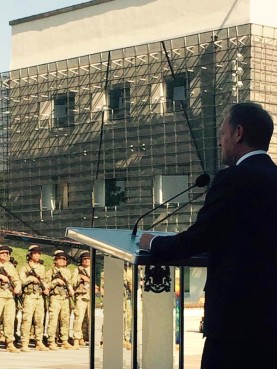 TBILISI, DFWatch–At the end of his two-day visit to Georgia, President of the European Council Donald Tusk on Tuesday attended a meeting with Georgian soldiers preparing to leave for the Central African Republic.

He wished the soldiers good luck and thanked them for participating in the EU-led mission there.

Georgia’s participation in the EU’s second largest operation is a precondition for Georgia’s success, Tusk added. He is on a tour of the region to follow up the results of the Eastern Partnership summit in Riga in May.

The first stop on the tour was Armenia, where he met with President Serzh Sargsyan to discuss the EU-Armenian relationship as well as issues related to the disputed Nagorno-Karabakh region, according to Tusk’s press office. After the meeting, he outlined that even though Armenia rejected the association agreement with the EU, the union intends to deepen relations with Armenia.

After visiting Armenia, Tusk arrived in Georgia on invitation by President Giorgi Margvelashvili. He met with the speaker of parliament, the prime minister and other officials. Margevlashvili later mentioned that it was Tusk’s own initiative to visit the conflict zone, particularly the area where there were several incidents more than a week ago.

“Georgia really matters a lot to us. Maybe Europe is not giving you everything you would like to get but it is nevertheless giving, especially when you compare Europe to others,” Tusk said after meeting Margvelashvili on the first day of his visit.

The EU Council president’s tour continues with a visit to Azerbaijan.