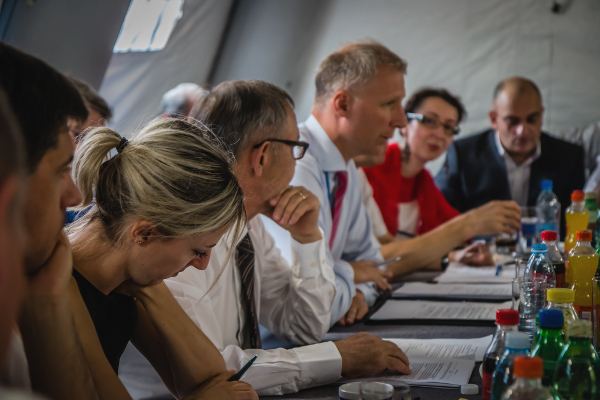 TBILISI, DFWatch–The sides in the 2008 Georgia war met for a field meeting on Wednesday at Ergneti, a village on the border with the Georgian breakaway region South Ossetia.

Also this time, border issues were on the agenda at the so-called Incident Prevention and Response Mechanisms (IPRM). Georgian representatives raised the problems caused by the installation of barbed wire and fences near the villages bordering the region.

RES, the public news agency of South Ossetia, reports that 20 people were detained for violating ‘the border’ in this period. 18 of them were released after paying a fine, while two are still in detention.

The breakaway region’s representative Hoch Gagloyty said they are continuing to study an incident near Ditsi that started on May 13. His side’s delegation presented video at the previous IPRM meeting in May showing men dressed in paramilitary clothing who tried to dismantle border installations. At yesterday’s meeting, he said the Georgian side had confirmed that the men were representatives of Georgian police who were looking for a local shepherd.

Another topic discussed concerned the Tiriponi irrigation canal, which runs through breakaway territory and the need for cleaning and restoration work. Representatives of the de facto government promised to renew the canal which will provide irrigation water for locals both in Georgian-controlled and breakaway territory.

IPRM meeting was co-facilitated by Kęstutis Jankauskas, the head of the EU Monitoring Mission in Georgia (EUMM), and Ambassador Angelo Gnaedinger, Special Representative of the OSCE and Chairperson-in-office for the South Caucasus. They noted that there has been a decrease in border detentions since the last IPRM meeting.

The next IPRM meeting will take place on July 30.