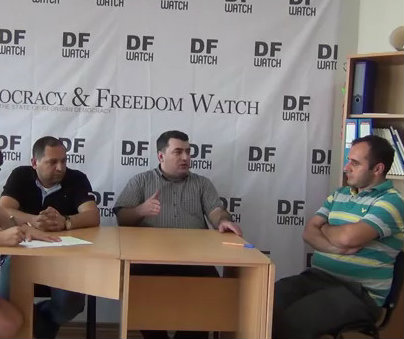 TBILISI, DFWatch–A few days ago, in a town on Georgia’s Black Sea coast, local Orthodox Christians hung a pig’s head on the entrance to a Muslim madrasa school which was to be opened in few days, insulting the religious feelings of Muslims.

What are the reasons for such actions and what may this process lead to if the government doesn’t react to it adequately? What about the role of the government and the Orthodox Church in this?

DFWatch September 13 organized a discussion about the Kobuleti incident and other signs of religious intolerance in Georgia.

Theologian Beka Mindiashvili says that the reason for this aggression is on the one hand related to the actions of clerics, who foment intolerance in people, and on the other hand, the government which doesn’t react adequately. He explains that intolerance in Georgia is related to identity, and now there is perception of identity in Georgia that if someone is not Orthodox they are not Georgian and this creates problems not only towards religious minorities but also other minorities, while the government by not having a proper reaction to it, in fact, encourages such actions.

Lawyer Giorgi Gotsiridze completely shares his position. He sees these processes from a legal standpoint and says that this is direct violation of the constitution and many laws, which should have been followed by a strict reaction from the government. Three persons were given administrative fines, minimal ones, which sets a bad precedent, he says.

Zaur Khalilov, executive director of Civic Integration Fund, thinks that these incidents are influencing political processes in the country and fears that it might be a deliberate policy aimed at disrupting the western course of the country.

The participants in the discussion focused on instances of harassment against Muslims in Georgia in the recent two years and outlined that in all these cases, the government was either a participant or didn’t have an adequate reaction, which had the effect of encouraging such incidents. They fear that this may have negative consequences for the country.

A representative of the Georgian Orthodox Church refused to participate in our discussion.