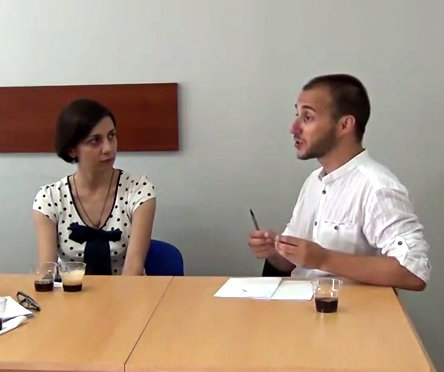 TBILISI, DFWatch–DF Watch last week organized a discussion about education and the problem of self-realization among youth.

The discussion included representatives of the youth wings of political parties.

Both of them agree that there is a problem, but they disagree about the severity of it. httpv://youtu.be/MYGgE7vmajg

She says that today, the prices of education are too high considering the social situation in the country and ‘it is no advantage if education in Georgia may be cheaper than in some European or American universities.’

Kakabadze says that the principle of receiving state scholarship needs to be revised, because students may get four year financing by points received in the national exams even if they didn’t have average academic index, while those who weren’t able to receive higher points in the national exams may be without financing, even if they are the best students in the university.

Kakhidze disagrees. He is not a student anymore and he represents a party which is in the ruling coalition. He says university exams should not be the basis for financing, because he thinks this may become a source of corruption, which would will introduce more problems for students and the education system.

They also disagree about the quality of education. Tako says that the quality of education at university level is not adequate to how much money is spent. She also says that it is hard to get employed after taking a university degree. She believes that employers prefer hiring youth who graduated from universities abroad, which reduces the motivation of youth to study here in Georgia and this has a negative influence on the education system.

Tako also says that the self-government systems at state universities need to be revised too, because the current system makes it possible for the government to have influence over students and no-one knows how and when the government will use this influence.

But Temo doesn’t agree with any of her assumptions. He says that if a student wants to, he or she can get a good education here and then properly use it.