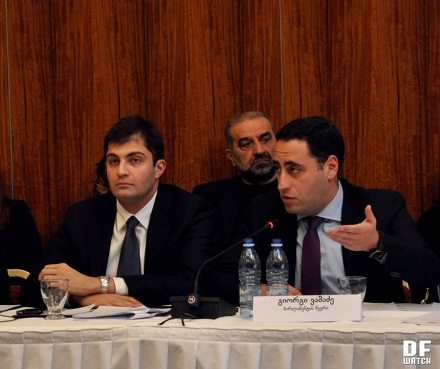 TBILISI, DFWatch–The Georgian justice minister and a member of parliament from the National Movement party (UNM) Monday argued about the issuing of a diplomatic passport during a conference to sum up the government’s first 100 days in power.

The two were attending a conference organized by local non-government organizations at Metechi Palace Hotel in Tbilisi.

Member of parliament Giorgi Vashadze from Saakashvili’s UNM party said at the conference that Justice Ministry Tea Tsulukiani dragged out the process to issue a diplomatic passport for him, while Lasha Tsimakuridze, an employee at the Justice Ministry who finally gave him the passport, was fired.

His statement made Tsulukiani upset. She said that Vashadze and Tinatin Bokuchava, another parliamentarian from the UNM, received illegal passports by the help of a Public Registry employee.

The minister asked not to say anything about staff working at the ministry.

“You are the man, who used your old ties and you gave illegal order to one of employees of the public registry, he couldn’t refuse you and gave you and Bokuchava illegal passports,” she said. She added that this was not public information but his statement made her announce about it publicly.

“After this I had to fire this competent person.”

But Vashadze responded saying that the ministry acted illegal itself, while putting him in trouble to get the passport, which is usually done in fifteen minutes. Minister once again asked him to stop talking about staff working at the ministry.

“You are just one grimacing man,” Tsulukiani told him.