Did the police action on May 26 comply with international standards?

Did the police action on May 26 comply with international standards? 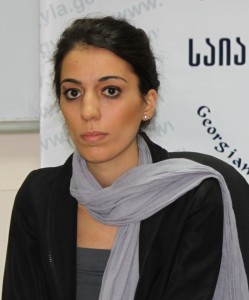 The government’s response to police violence on May 26, 2011, was clearly insufficient and inadequate and encourages a syndrome of impunity, writes Tamta Mikeladze, lawyer with Georgian Young Lawyer’s Association.

The assembly held outside parliament on May 25-26 was peaceful in general, which, according to applicable international standards, imposed an obligation on the state to resort to dispersal as an extreme means for restriction of freedom of assembly. To the contrary, the state restricted participants’ freedom of assembly without using other lighter means for restriction of the right.

Furthermore, the dispersal operation itself was planned by the police in violation of applicable international standards. More specifically, 1) the police did not use open exits for participants, which would have enabled demonstrators to flee the scene. Absence of exits was confirmed by witness statements, as well as video and photo materials recorded by media. We asked the Interior Ministry to present information and evidence that would have proven the existence of an open corridor, but the Ministry refused to provide such information. In absence of open exits, use of force by the police was disproportionate in nature from the very beginning; 2) during the dispersal of the May 26 assembly the police resorted to the unnecessary use of mass and excessive force. Under the UN Basic Principles on the Use of Force, “in the dispersal of assemblies that are non-violent, law enforcement officials shall avoid the use of force or, where that is not practicable, shall restrict such force to the minimum extent necessary”. Despite the noted stipulation, the dispersal was initially planned by the police in a way that allowed use of disproportionate force. In this regard, I would like to highlight the following circumstances:

–    According to Ministry of Internal Affairs (hereafter MIA), during the dispersal there were 5 000 Interior Ministry officers on Rustaveli Avenue, including 1 000 law enforcers that participated in the dispersal. According to MIA, number of assembly participants at that time was around 800-1200 people. Such proportion correlation initially created the risks of use of disproportionate force.

–    During the dispersal operation, the police attacked from all sides, deadlocking participants.

–    During the dispersal operation, the police simultaneously used the special means for protection, without discrimination between the special means according to extent of violence (force) generated by them.

It is worth noting that both the Special Forces Unit equipped with special gear as well as Interior Ministry officers dressed in civilian clothes participated in the operation of dispersal, the latter being particularly aggressive and unprofessional in their actions. Frequently, Special Forces officers did not wear any identification number on their uniform that would have enabled the investigation to determine their identity and hold them liable for their actions.

During the dispersal, the police used mass and unnecessary force against persons who were already subject to their effective control and did not pose any threat whatsoever. Video materials recorded by media outlets show a number of facts where representatives of Special Forces Unit were severally beating peaceful participants. The police used force against participants who tried to escape.

In the process of using special means, the police committed mass violation of applicable procedures, including, shooting rubber bullets at participants from a close distance. Frequently, the police targeted prohibited body parts (head, face) with special means (rubber bullets, rubber truncheons). They were also throwing gas explosives at groups of participants, which is also unacceptable.

During the dispersal, there were cases of degrading treatment of participants, by means of the so-called “corridors of shame”. In their statements police officers frequently violated the requirement of political neutrality. 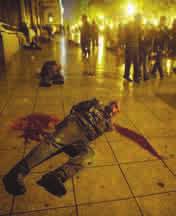 During the dispersal, the police failed to prevent risks of life deprivation and health injuries or to minimize such threats. There were facts of deprivation of lives of four participants and one police officer, connected to developments during the dispersal.  Violations of preventive obligations during the operation was most vivid when convoy of the assembly organizers fled and the police stationed a live cordon of police officers against the convoy vehicles that constitute the source of an increased threat; furthermore, the police was using indiscriminate force against peaceful participants who were following the convoy. Clearly, life and health threatening risks in the operation that was planned this way were very high. The official version of the investigation connects deprivation of lives of one of the participants Nodar Tskhadadze and a policeman, Vladimer Masurashvili with the noted episode, as well as health injuries sustained by 9 policemen.

Despite the scale and the extent of violence committed by the police during the dispersal, investigation into the noted facts was terminated due to absence of signs of a crime; furthermore, disciplinary liability was imposed only on 16 policemen of MIA. MIA refuses to make public official positions and identity of these persons or the specific violation for which they were held liable. Clearly, such response of the state to the developments is insufficient and inadequate, which encourages a syndrome of impunity. Furthermore, in view of the fact that from the very beginning the dispersal was planned wrongfully and during the dispersal the police resorted to mass and excessive violence (which may not be viewed as individual violations by concrete policemen), officials who planned and lead the operation of dispersal should be held legally responsible.