Did Kadyrov send a hitman to murder Georgian journalist for swearing at his patron?

Did Kadyrov send a hitman to murder Georgian journalist for swearing at his patron? 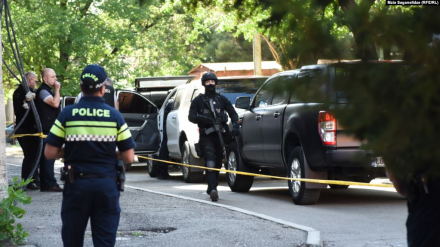 Riot police at the scene of Vasambeg Bokov arrest. (RFE/RL)

The State Security Service of Georgia (SUS) Monday late evening confirmed information that had earlier that day been aired by several media outlets about the alleged plot to murder a journalist who swore at Putin about a year ago.

“The arrest of V.B. was carried out within the framework of the investigation of the criminal case on the fact of preparation for premeditated murder, which was carried out by the Counter-Terrorism Center of the State Security Service on the basis of relevant operative information,” reads an official statement of SUS.

The suspect whose identity wasn’t disclosed in the statement, however, was arrested not for murder attempt but for documentation forgery “to avoid other, more serious crime”, the SUS states.

First about the alleged plot reported opposition TV channel Formula on Monday. Based on a source in the intelligence, it reported that an ethnic Chechen man arrested in Tbilisi June 12 planned assassination of TV celebrity Giorgi Gabunia who last year publicly swore at President Putin in Russian on air.

Soon afterwards, Monday evening, the Director General of another opposition TV channel Mtavari Arkhi, Nika Gvaramia, said at the emergency briefing that he’d had an information about the plot “weeks ago”. He confirmed the existence of assassination plot but claimed the suspect is an ethnic Ingush, not Chechen. He identified him as a 38 y/o Russian national Vasambeg Bokov.

The information about the plot was communicated to Georgian intelligence by their Ukrainian colleagues, Gvaramia said, publicly accusing Chechen leader of being a mastermind of the assassination attempt.

Ramzan Kadyrov has continuously been accused by Russia’s democratic opposition and human rights activists of assassination of opponents, including politicians and journalists, honor killings, torture and murder of homosexuals, and brutal suppression of any dissent in Chechnya. Russian opposition strongly believes that prominent critics of Putin, politician Boris Nemtsov and journalist Anna Politkovskaya, among others, were assassinated by orders from Kadyrov personally.

In July 2019, soon after Georgian journalist Giorgi Gabunia’s insulting tirade Kadyrov publicly slammed him, dubbing the journalist “scum and son of a bitch”.

On July 8, 2019, Giorgi Gabunia who then was an anchor at Rustavi2 swore at President Putin in Russian on air. “F**k you, Volodya, along with your slaves. F**k you mother […] F**k on the graves (of your father and mother),” he said.