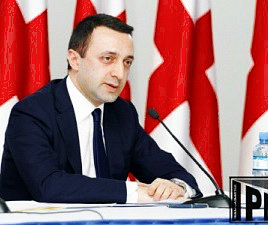 TBILISI, DFWatch–Georgia’s interior minister says the dirty Soviet-style archive of compromising surveillance videos illegally amassed by the Saakashvili regime will be destroyed in the ‘next few days’, but the date remains unknown.

Interior Minister Irakli Gharibashvili said the reason is that some of the members of a commission created to destroy the archive, which by the latest count contains around 24 000 files, video and audio clips, are not in Georgia at the moment.

Eka Gigauri and Lasha Tughishi, who are on the commission, told journalists Thursday that they had hoped that the archive would have been destroyed by the end of the day with media present, but the minister told them the event was delayed again.

“The procedure has started. We’ve gone through preparations. We are ready and the decision hasn’t changed. The private video footage will be destroyed in a few days, as soon as all members of the commission are here,” Gharibashvili said, this time without mentioning a specific date.

The Ivanishvili government, after it came to power in October 2012, discovered a large amount of illegal files at the interior and defense ministries. The files are audio and video recordings of people in private and even sexual situations, that were made by agents of the Saakashvili regime in order to have a means of control and pressure on key players in society, like journalists and politicians, and ensure their loyalty to the regime.

The Defense Ministry transferred the files to the Ministry of Internal Affairs, where they are now being kept.

Government officials several times promised that the archive would be destroyed, but the process has dragged out. An important contributing factor to the archive now being destroyed was the recent detention of a former deputy interior minister. The official, who had stayed at the ministry from when Saakashvili held power, used the archive for his own personal goals. Later the court released him on bail, but he lost his job.

Two months ago, a commission was created to handle the destruction process. It is chaired by the interior minister. Other members are the chief prosecutor, the ombudsman, representatives of organizations Eka Gigauri, Lasha Tughushi, Kakhi Kakhishvili, among others.