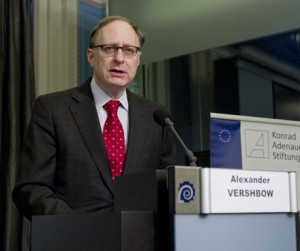 The purpose of the trip is to monitor the implementation of a ‘substantive package’ offered by the alliance at the Wales summit last summer, according to a spokesperson for Georgia’s Foreign Ministry.

Spokesperson Davit Kereselidze said Monday that Vershbow will hold meetings with the president, prime minister, speaker of parliament and members of the government.

Also on the NATO deputy chief’s itinerary is a visit to the location which has been selected for the construction of a joint NATO-Georgia training center.

The location has been decided, but this is secret information, he added.

In an interview with Georgia’s Public Broadcaster on Monday, Vershbow said he hopes the training center will open by the end of 2015 and NATO members and partners will be able to conduct exercises there.

During his visit, he will also have talks about the strengthening of democratic institutions, rule of law and court reform.