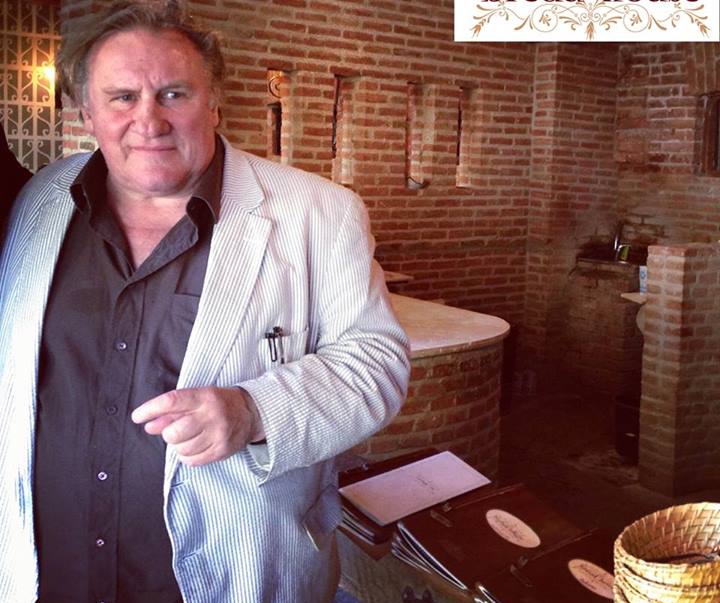 Gérard Depardieu stayed at the restaurant Puris Sakhli in Tbilisi for about one hour. (Photo posted on Facebook by the restaurant.)

TBILISI, DFWatch–French actor Gérard Depardieu, who recently became a Russian citizen, was spotted at a restaurant in Tbilisi yesterday.

Depardieu arrived Monday morning at Tbilisi airport, and it was first reported that he stayed in the transit area there for twenty minutes and then boarded a flight to Baku.

But on Wednesday, the restaurant Puris Sakhli in Tbilisi posted a photo showing that the actor indeed took a trip into town. He was at the restaurant in the company of five other persons, and stayed for about one hour, according to the staff.

Nutsa Malashkhia, spokesperson for M Group, which owns the restaurant, told Interpressnews that Depardieu came at 13:00 on October 21. When other guests spotted the famous actor, they took pictures with him.

“He left an autograph for us on a plate,” she said, adding that they didn’t know beforehand that the actor was planning to visit their restaurant.

In summer, Depardieu visited the Georgian breakaway region Abkhazia, and was hosted in Sukhumi by the de facto president, Alexander Ankvab.

Georgia has a law about the occupied territories which says that a person who enters Abkhazia or South Ossetia from the Russian side without permission from Tbilisi will be punished as soon as he or she crosses into Georgia in the future.

Minister of Justice Thea Tsulukiani on Tuesday told journalists that the government will study the issue of his brief Tbilisi visit.

She said that after studying the facts, the government will make a decision about what reaction there will be to his visit.

“Gérard Depardieu is not a person about whom Georgia or any other country can make hasty decisions. That is why we will study the facts and then react. The law is the same for everyone,” she said.