Demonstrations in support of Ukraine were held in Tbilisi

Demonstrations in support of Ukraine were held in Tbilisi 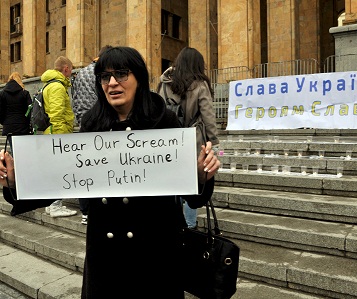 The ones who died in the fighting in Kiev were remembered in Tbilisi on Sunday. (DF Watch.)

TBILISI, DFWatch–Georgians gathered at the old parliament building in Tbilisi on Sunday to pay tribute to those who died during the recent clashes in Ukraine.

Activists also started a campaign to collect money to pay for treatment of those who were wounded. At least 4 000 lari has been collected so far.

Organizers brought photos of people who have died in Ukraine in recent days and lit candles. They also brought boxes for collection of money.

According to the most recent information, 88 people have died in the fighting in Ukraine, and among them two Georgians.

The body of Davit Kipiani was transferred to Tbilisi late Saturday night. His family, who were waiting at the airport, said he died from being hit by two sniper bullets.

The victims of Ukraine’s political crisis were also paid tribute to with a minute’s silence at the beginning of a rugby match between Georgia and Russia on Saturday. Georgia won the match 36-10.

Georgian fans came carrying Ukrainian flags and accessories and were dressed in yellow and blue. They whistled when the Russian national anthem was played.

A support demonstration for Ukraine on Saturday started from Rustaveli metro station and went to the monument to Ukrainian poet Taras Shevchenko. Hundreds of people participated.