Demonstrations continue after dismantling of minaret

Demonstrations continue after dismantling of minaret 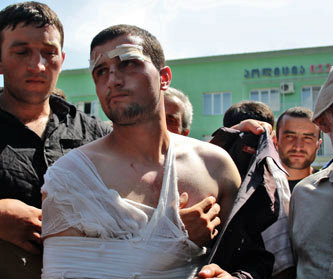 The Public Defender calls for an immediate investigation of the violence during a demonstration against the dismantling of a minaret in southern Georgia. (Samkhretis Karibche.)

TBILISI, DFWatch–All the people detained while protesting against the dismantling of a minaret at a Mosque in the village Chela, in southern Georgia, have now been released.

Meanwhile, the protests continue in the village and support rallies are held in the capital and in other large cities and towns. The demonstrators demand that the minaret is put back up.

Samkhretis Karibche, a local media outlet, published more photos of the incident, which show that during the scuffle with police, some of the demonstrators were injured.

Representatives of the Public Defender’s office arrived in the village in order to study the situation, but meanwhile the office published a short statement which reads that the photo and video footage published in the media shows that law enforcers physically beat locals, which it says is ‘unacceptable and requires an immediate examination and reaction’.

“We also hope that trials of the detainees will be conducted by defending the right to a fair trial and that the court will study each factual or legal grounds and make justified decisions,’ the statement reads.

Dismantling of the minaret started on August 26. There were named two reasons: first the Revenue Service published a statement which said the owner of the minaret imported material for its construction in violation of Turkish border and the service made a decision to temporarily dismantle the minaret. After studying all the required information, the owner would be allowed to restore it at his own expense.

But there were also reports that the local municipality made a decision to dismantle the minaret because it was constructed illegally; however Georgian legislation doesn’t define rules for constructing minarets.

Thea Tsulukiani, Minister of Justice, on Wednesday responded to the incident saying that Georgia sooner or later will have to make a decision about whether allow minarets in the country or not. She added that she thinks the way in which the minaret in Chela was dismantled is unacceptable. She says that different countries have made different decisions about the same issue. In some European countries, the population has held a referendum and decided to not allow minarets.

“Whether there will be prayer in a Mosque doesn’t depend on the minaret. Prayer in the Chela Mosque isn’t interrupted,” she said.

The minister said if there were problems with the customs service, then employees at the border point must be punished, but she has information that the building material for the minaret was imported in violation of law.

“I would wish to prevent such issues, but not dismantle minarets that are already constructed,” she said.

Tsulukiani appealed to Muslims and the Mufti, expressing concern that they allowed the construction of the minaret in one night without notifying neither local population nor the central government.

“Construction of any building requires different types of relations, but this form of dismantling is still unacceptable for me,” she added.

“It is also alarming the decision which the Revenue Service has made and the way in which this body decided to conduct an audit, while the issue concerning religious minorities and their constitutional rights,” TI representatives explain. “By those actions, the rights of the local Muslims were violated.”