Demonstration against minaret in Georgian village

Demonstration against minaret in Georgian village 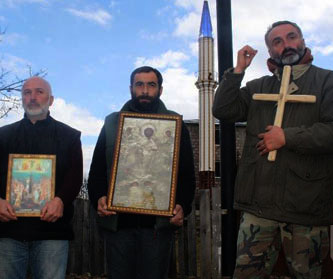 Orthodox activists are against the re-erecting of a minaret in the village Chela. (Photo: Samkhretis Karibche.)

TBILISI, DFWatch–Orthodox clerics and members of a radical religious group Thursday demonstrated in the Georgian village Chela against the restoration of a minaret on the night of November 27.

The day ended without incident, and the rally was dissolved peacefully. Protesters plan to organize a national referendum to decide whether it was right to restore the minaret in Chela.

The rally was organized by priests from nearby churches and drew about a hundred people. Union of Orthodox Parents, which is radical religious group mostly known for dispersing a halloween party and rallying against LGBT people, came to Chela from Tbilisi to join the protest.

Demonstrators say locals did not take part in the rally after clerics advised them to avoid any problems.

The rally ended late in the evening on Thursday. All day police was controlling the place, while Muslims remained in the mosque. They didn’t go into the yard in order to avoid incidents.

Sknews.ge writes that about 500 policemen were controlling the small village with not more than 55 families on the day of rally. https://www.youtube.com/watch?v=49BuvZ7T3Xc#t=44

Berdia Kapianidze, one of the rally participants, told the local paper Samkhretis Karibche (Sknews.ge) that the rally is over. They have conducted Orthodox prayer at the mosque during the day and now they plan to start legal fight after consulting with lawyer in order to get ready for the referendum.