Democracy groups in Georgia go on the offensive

Democracy groups in Georgia go on the offensive 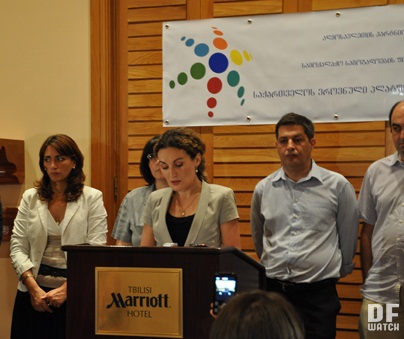 Many of Tbilisi's non-governmental organizations have signed on to an appeal to end the violations.

TBILISI, DFWatch – Georgian National Platform, a coalition of local non-governmental organizations (NGOs), has released a statement regarding the period leading up to the parliamentary election.

The National Platform was set up in October 2010 with a goal to support priorities and goals of eastern partnership, to the country’s democratic development and support the process of Euro-integration.

The statement of the National Platform focuses on challenges regarding media diversity and journalists’ activity.

The first problem it identifies is media diversity. Recently, the government agreed to implement the principles of must-carry and must-offer, which means that cable operator networks are obliged to carry the signal of all broadcasters, but only for the last 60 days before an election.

The National Platform salutes the changes, but argues that it is not enough to fully inform the population over Georgia, as only part of population uses cable TV as a source of information.

The majority of customers of cable networks live in cities, while people in the regions mostly use satellite dishes to receive television.

“We express our concern over the impoundment of Maestro TV company’s satellite dish antennas. We believe this action is inadmissible, as it hinders the exercise of constitutional rights and freedoms, including freedom of speech and expression, the right to obtain and spread information, as well as property rights and falls beyond the established legal framework,” says the statement, which is supported by 60 local NGOs.

“The decision contradicts the spirit of the Government-endorsed ‘must carry’ and ‘must offer’ regulations and in practice leads to discriminatory conditions for a considerable part of Georgia’s population with no access to cable TV providers’ services.”

The other thing underlined in National Platform’s statement is the terms for the implementation of those principles. The organizations think those regulations should be implemented on a permanent basis, because this it is an important mechanism to provide transparent and trustworthy election process as well as part of democratic process.

The platform calls attention to the many incidents of violence against journalists and how they have repeatedly been prevented from reporting from different events during the election campaign.

Georgian National Platform asks the government to take measures and carry out an investigation of each case against journalists, punish those guilty and prevent further abuse.

“The National Platform takes note of and expresses its appreciation for the statement of the Ambassadorial Working Group (August 18, 2012) reflecting upon the electoral environment, including the media.”