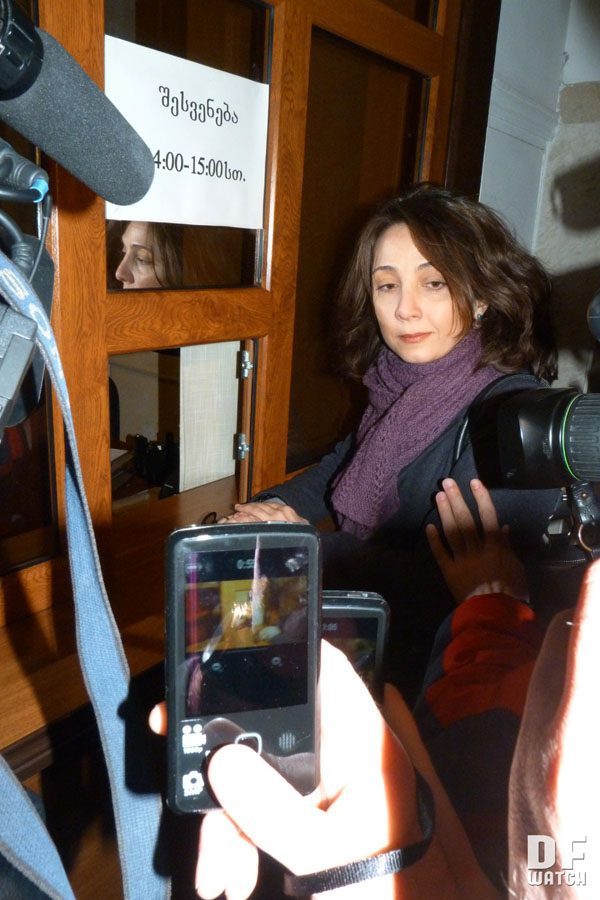 Nino Khatiskatsi from Transparency International delivers a proposal for law amendments in the reception of Georgia's parliament Friday. The 'This Affects You Too' campaign wants international election observers to come sooner than usual to follow the election campaign in Georgia. They also ask for changes in the party financing law and the criminal code. (Photo: Mari Nikuradze.)

TBILISI, DFWatch – Here in Georgia, the ‘This Affects You Too’ campaign continues as organizers delivered a special appeal to parliament, the president’s administration and the foreign affairs ministry, requesting them to invite long term observers from the OSCE for the whole election year 2012.

Nino Khatiskatsi from Transparency International Georgia says 82 organizations signed the appeal, and a detailed explanation has been sent to the OSCE’s democracy branch ODIHR requesting them to send their mission earlier than planned.

“We ask them to send the mission earlier than when the election campaign officially starts; the reason is that the election campaign in Georgia is already in an active phase seven months earlier,” she says, adding that it is very important how objectively this process will be monitored by domestic and international observers.

This Affects You Too is a campaign by local non-governmental organizations (NGOs) and media, with a goal to demand amendments to a law about financing of political parties, formally titled the law on political unions of citizens. The law was changed at the end of December 2011. The government’s stated aim was to make the political party financing system more transparent and avoid bribery and corruption during the election campaign.

2012 is an election year in Georgia. Parliament elections are scheduled for October. The year started noisy. NGOs, experts, the opposition and international organizations were concerned about the newly adopted changes. The law completely restricts the party financing system, which is good at one point, however all the strict prohibitions and restrictions for political parties and persons now applies to legal and individual persons directly or indirectly related to parties.

The law is vague and unclear, they say. It is nearly impossible to say exactly to whom it applies, and this creates wiggle-room for arbitrarily applying the law. The law also applies criminal responsibility for voters who receive gifts from for instance politicians out campaigning. This will be seen as bribery.

The campaign is called ‘This Affects You Too’ because the law may be applied to any citizen. Since the campaign started, organizers have held meetings and rallies to explain to the diplomatic corps, international organizations and ordinary people, about the threats the law may pose to society.

Meanwhile, the campaign’s initiative group prepared an alternative legislative proposal and delivered it to parliament for review. They held meetings with Parliament’s Judiciary Committee and a first result is already achieved; the judiciary committee says an additional article will be added to the law, which will define that the restrictions won’t apply to international and local organizations if they act within the frames of law.

But this is not enough, the groups say. One demand in their alternative proposal is to cancel Criminal Law responsibility and all other responsibility for voters, so they will not be accused of being bribed. A party or a legal person should be given responsibility in case of bribery, but not the voter, they ask.

Another of their demands is that the categories of persons which may get targeted by the restrictions for political parties should be decreased. These restrictions should only apply to persons who have declared what’s called “electoral” goals [in other words, people who are directly involved in trying to elect someone, ed.], not general political goals, and are spending money to such ends. The Chamber of Control should have clearly defined limits to its activities, to avoid the risk of it conducting its work arbitrarily. Rules for sequestration should be defined in detail. The Chamber was granted this authority. Decrease the defined unreasonable sanctions for parties and other persons.