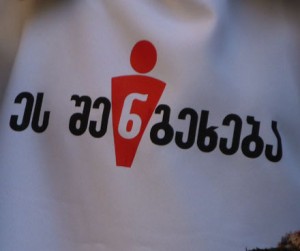 TBILISI, DFWatch–Organizations that are members of the campaign This Affects You Too on Monday called on the government to take measures to rein in the use of secret surveillance and wiretapping.

In a statement issued on Monday, the groups claim that the vast majority of officials who served under former President Saakashvili and ordered, collected and stored videos and files depicting people in private situations and likely blackmailed them, remain unpunished.

The groups also claim that there is reasonable suspicion that those who conducted illegal surveillance continue to work at law enforcement bodies, which brings into question the effectiveness, objectiveness and neutrality of the investigation.

Three sex tapes were uploaded to the Internet – on March 11, 14 and 31 – showing several politicians. The last video was posted even though two people have been arrested in the case. The clips contained warnings of more videos to come.

This Affects You Too has the following demands: to reform the State Security Service, as well as taking away the function of Internet monitoring and the access to phone surveillance from this body and transfer it to a more independent body; setting up an independent investigative body which can investigate crimes committed by officials, as the government doesn’t have an interest in effectively investigating such cases.

Members of the campaign are meeting with parliamentary factions to share their opinions and initiatives related to this issue, and on Monday they met with the opposition party Free Democrats. The party fully supported the campaign.

Nino Goguadze from the Free Democrats believes that making legislation tougher is not enough and the Chief Prosecutor has to resign, as someone has to take the political responsibility.

“Particular steps need to be taken in order that one day we do not discover a giant archive of footage collected by some special service and information is leaked from his archive and used to blackmail people,” Eka Gigauri from Transparency International Georgia said after the meeting with the Free Democrats parliamentarians.

March 23, This Affects You Too met with members of Girchi, a political party founded by former members of the National Movement. Campaigners are also discussing their initiative with the human rights committee in parliament, which is considering an amendment to the legislation concerning secret surveillance.

This Affects You Too is a campaign that includes organizations like Education and Monitoring Center, TI Georgia, Open Society Georgia Foundation, CIDA and ISFED.