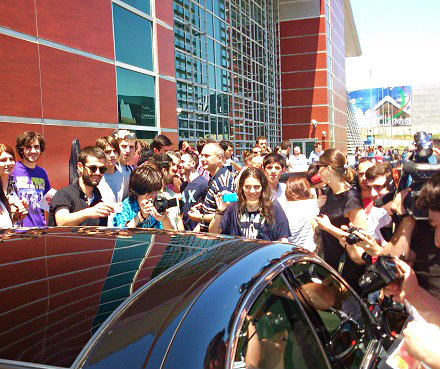 TBILISI, DFWatch–Georgians are getting ready for the next Tbilisi Open Air musical event, which this time will include world famous stars like Deep Purple, Tricky, Infected Mushrooms and Modeselektor.

Tbilisi Open Air Festival, which has been held every year since 2009, will take place on Wednesday at Dinamo Arena, which a few days ago was venue for the farewell football match of former AC Milan player Kakhi Kaladze.

Achiko Guledani, from Altervision Group, which organizes music festivals, said a few days ago that this year’s festival is important because promoters will follow it and maybe even list Georgia in upcoming tours for worldwide stars.

Those who wish to attend the festival can buy tickets from about USD 24 to USD 150 for VIP tickets.

The event will start at 16:00 and the show will include seven bands. Kid Jesus from Georgia will open the festival, followed by Black Strobe, The Subways, Infected Mushroom, Deep Purple, Tricky and Modeselektor.

The date of the festival was announced several months ago, while the Altervision Group organized different musical events both for information and entertainment purposes.

Deep Purple arrived at Tbilisi airport a few hours ago and was greeted by fans.