David Lidington explains the UK’s view on the Ukraine crisis

David Lidington explains the UK’s view on the Ukraine crisis 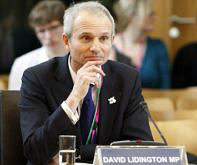 TBILISI, DFWatch–We sat down with David Lidington, UK Minister for Europe, who visited on April 1-2, and asked him about Georgia’s association agreement with the EU and whether NATO should set it on course for membership.

Is it possible that Russia will bring pressure to bear on Georgia before June, in order to interrupt the signing of the Association Agreement with the EU? Is there a possibility for a Ukrainian scenario in Georgia?

D.L: By its actions in Ukraine, Russia has created the greatest crisis in Europe after the Cold War. I understand that Georgia and Moldova are concerned because of this. Russia’s actions haven’t been spontaneous and a rapid decision, but this was a targeted and well prepared operation which Russia conducted in Crimea. That’s why I perfectly understand that this is a danger and people are concerned about it in Georgia. The major goal of European colleagues and US colleagues for now is to show solidarity with Ukraine, but also to other countries which may be affected, Georgia, Moldova and even the Baltic countries, and take measures to underline that these states aren’t alone and we must somehow find a way to avoid aggression.

D.L: Of course, there is a risk of aggression, and this risk will remain, as we see that Russian troops haven’t yet left the territory of Ukraine. So it is too hard to reassure us that there is no such risk. Moreover, on the background of recent events, Russia aggressively violated all the international agreements which it has signed – Helsinki or Budapest treaties which it joined after the collapse of the Soviet Union. So it is too hard to exclude those risks and expectation that there won’t be aggression from Russia. It is obvious that Russia deliberately and aggressively broke all those treaties and it now creates a different reality.

Considering this reality how adequate was the reaction of the West – establishing economic sanctions for example, how it can be a guarantee that Russia won’t desire more believing that it went on once and it may go on again?

D.L: It is very important to retain unity about it in the West and retain this unity successful as Russia is isolated on the background of all this. You will be surprised that there was such a unity in the United Nations’ Security Council and General Assembly about these sanctions, even among the states which instinctively always support Russia, now they supported sanctions against Russia, and they didn’t take a position in support of Russia. So it is important to remain firm.

We must acknowledge that these sanctions weren’t purposeful. We are speaking about excluding Russia from the G8, Russia’s relations with NATO and the EU went through important transformation and this relation continues being restricted. I believe that we have sent very important signals to Russia – both EU and the US. We sent signals that it mustn’t create tension in relations and mustn’t implement aggression.

Economic sanctions are also very important. We have seen that these sanctions caused a fall of Russian currency rates and these signals will finally cause that people won’t be any more interested to invest money in Russia and every country will be forced to reckon it.

I can speak from the perspective of my government and prime minister and say that if the situation gets even more tense, my government will be ready to make these economic sanctions tougher.

What do you mean by tenser situation? What it will be and where will be the red mark after which west will think of establishing tougher sanctions?

D.L: All types of actions.

Do you mean only military aggression or other type of influences in different states or forcing countries to act in favor of Russian interests?

D.L: Of course, aggressive actions has great importance for us, but what you said is very important. Now we are focusing on whether Russia will come to the table for a dialogue with Ukraine – currently, it refuses and doesn’t recognize Ukraine’s government – and whether it will let Ukraine conduct free elections in May, peacefully, and whether it will try to bring tension by provocations and strengthening its influence there.

If the West had reacted adequately against Russia after the war with Georgia in 2008, would Russia have done the same in Ukraine as it did now? Maybe it is necessary now for the West to change its policy?

D.L: I will say that of course, Europe and the US now serious think how it is possible to continue relation with Russia in all these regards. Policy will change but it is not yet known how.

When it comes to the war in 2008, I think historians will analyze this better. For me it is important to focus on what is happening now and on what should be done to avoid this.

Recent statement by Barack Obama about Georgia and Ukraine joining NATO has caused controversy. Some explained it by saying that his statement didn’t concern the prospects of these countries, but the important thing is: Has the attitude of NATO member countries really changed or not? I am asking about the upcoming NATO summit, not the long-term perspective.

D.L: The discussion is the prerogative of all members of the Alliance, and all must sit down together and in June the schedule of this summit will be defined.

Do you think that attitudes have changed?

D.L: The British position is that we firmly stand by the decision which was made at the Bucharest summit, that Georgia will join NATO. We will soon see if it happens now or with MAP or any other format. We have to make important decisions at this summit, about Afghanistan and about configurations. What type of organization will NATO be and of course some issues may change, considering events in Ukraine, which we will have a discussion about in June. Some things will change, and this will be decided in June.

What is your message to Georgia?

D.L: Stand firmly and retain this stability for your historical choice – being democratic, having rule of law and European choice.