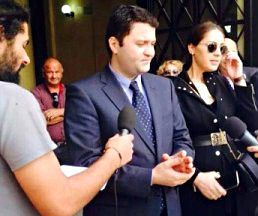 TBILISI, DFWatch–Tbilisi City Court on Wednesday sentenced former intelligence official Data Akhalaia in absentia to 12 years in jail in connection with the Navtlughi special operation in 2006.

Data Akhalaia is seen as a close ally of ex-President Mikheil Saakashvili and the most feared among his power clique. He ran the domestic intelligence service Constitutional Security Department (‘Kudi’) in a way that spread fear through society.

Akhalaia was acquitted of the charge about exceeding official powers, but found guilty of conspiracy to commit murder by an official.

The case centers on the murder of three young men – Marad Artmeladze, Roman Surmanidze and Murad Gorgadze – during a special police operation at Navtlughi bus station in Tbilisi called in 2006.

Data Akhalaia was arrested in April, 2014 as he was trying to leave Greece and enter Italy using a fake passport issued in the name of Otar Urushadze. He was released on a 100,000 euro bail. Greece refused to extradite Akhalaia to Georgia.

Like many of Saakashvili loyalists, Data left Georgia immediately after the UNM’s defeat in the October 1, 2012 parliamentary election.

He held high posts at the Interior Ministry and then chaired ‘Kudi’, which was one of the most important bodies at the ministry. The opposition at that time accused ‘Kudi’, along with the Special Operations Department, or ‘Sodi’, of attacks on the political opposition during mass protests in November 2007, April 2009 and May 2011.

Data went on to become deputy defense minister, while his brother became interior minister. People thought that Bacho Akhalaia still controlled the Defense Ministry through his brother after being appointed to the new post, which happened a few months before the parliamentary election in 2012.

Bacho, the younger brother, served as head of the Penitentiary Department of the Ministry of Justice, then minister of defense and briefly in 2012 as minister of internal affairs.