Danger of more landslides in Dariali

Danger of more landslides in Dariali 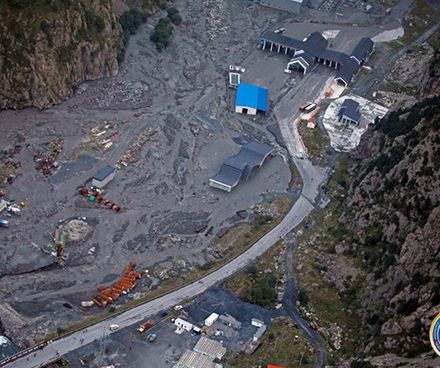 After two catastrophic landslides in three months, the government has decided to place a weather monitoring station in Dariali. (Photo published by Ministry of Regional Development and Infrastructure.)

TBILISI, DFWatch–There is a danger that more snow may come loose from Devdorak glacier and trigger another landslide in Dariali Valley, Georgia’s Environment Ministry warns.

Experts working for the National Agency of Environment have visually surveyed the glacier and concluded that there is a risk of another event.

Thursday’s massive landslide was the second in only three months, and again caused fatalities. The ministry has decided to place an automated weather station in the area which will measure rainfall, temperature, and atmospheric pressure, and feed the data to the Environment Agency.

The purpose of the 24 hour monitoring in Dariali Valley is to provide the public with prior warning if there is another disaster.

Meanwhile, the Finance Ministry has set up a commission to study the damage done by the landslide. The commission is staffed by representatives of the Revenue Service and other departments from the ministry.

According to Vazha Panchulia, head of the Road Department, all the people who were waiting at the Kazbegi border crossing have now been moved to a safer place. Rescue workers assisted in bringing more than 70 people from a monastery in Dariali Valley to Kazbegi.

The State Security and Crisis Management Council says the gas pipeline to Armenia will be operational in two days, but that at least two weeks will be needed to reopen the road blocked by the disaster.

The Armenian PM offered his Georgian counterpart assistance at a meeting in connection with a visit by Georgian PM Irakli Gharibashvili.

The road through Dariali Valley is still closed for traffic, and Larsi border crossing is blocked. One person was found dead Thursday, while one more is missing.