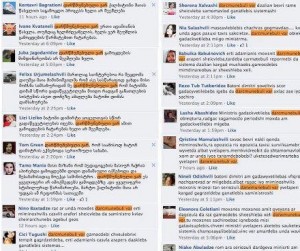 Commenters without a photo of themselves and almost no friends were defending the government, using the same phrases and the word "probably". After the phenomenon had attracted attention, the "Shashkin bots" stopped using "probably" and instead wrote that they were "convinced" that the minister made the right decision (above).

TBILISI, DFWatch – The firing of the head of the National Examinations Center is being vigorously discussed in Georgia’s social media. Some claim that authorities are using fake identities to contain the political fallout.

Maya Miminoshvili was fired two days ago, two months before there are to be held national exams in the country.

Pupils are now discussing whether her dismissal will affect their exams. Some are wondering if the exams will be postponed.

But the new head Khatia Dekanoidze, who was rector at the police academy, promised that the exams will go ahead as scheduled.

Now there is a struggle between the supporters and critics of Miminoshvili. Even though declares that she will stay out of politics, many criticized her for visiting Bidzina Ivanishvili the day she was fired. Those who are against the businessman and his coalition criticize Ivanishvili’s supporters of only being after the money and say that this was ‘cheap step.’

“When the Ministry and its subdivision have different policies and in this case National Center and its employees do not share position of Education Ministry and generally policy regarding different issues, Shashkin should have fired Miminoshvili earlier. I would act this way.”

But those who support Miminoshvili consider his statement a way of justifying the ministry’s actions as they are sure that Miminoshvili was fired for political reasons, which is neither new nor unusual in Georgia.

As the different sides are arguing the case online, a user on Facebook has found that many commenters appear to be what he calls “Shashkin bots”. Right after Miminoshvili was fired, for several hours all comments had nearly the same content like ‘probably there was reason that she is fired,’ ‘probably she did something wrong and deserved it,’ ‘probably it was necessary to fire her.’

A screenshot of comments was posted on Facebook by a user who highlighted the word ‘probably’, which appears in each comment on those posts.

“None of them have their own photo uploaded, they have very few friends (some of them have 7 friends for example) and mainly they are friends with each other; they have liked mainly political pages (Saakashvili’s page, Ugulava’s page, Bakradze, Gilauri, other ministries’ pages, Lazika, Didgori, I love Misha, I hate Bidzina, etc.); they have shared mainly one and same things, 99 percent of them political-national. No private life, no music, movies, photos, jokes.”

A few hours later, it seemed that someone at propaganda headquarters had noticed that people were on to them, as now all the comments instead of “maybe” contained the phrase “I am sure”. Now the users write things like “I am sure Dimitry had appropriate reason to fire her”; “I am sure this won’t affect certificate exams”; “I am sure she has made very bad mistake.”