Culture Minister fires deputy amid dispute over ancient mine

Culture Minister fires deputy amid dispute over ancient mine 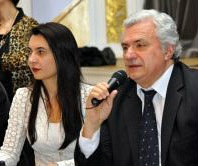 TBILISI, DFWatch–Georgian Culture Minister Guram Odisharia has dismissed his deputy, Marine Mizandari, claiming that she wasn’t able to work in a team and that they had different views.

Mizandari herself claims the reason for her dismissal was a disagreement over whether to allow a mining company to dig for gold in the over four thousand year old Sakdrisi gold mine.

Sakdrisi came to the fore last year when environmental activists and local and foreign archaeologists demanded to reinstate the ancient mine’s heritage status, which was lifted by the Culture Ministry in the summer of 2013.

About two weeks ago, Mizandari brought up the issue of Sakdrisi at a session of the cultural heritage protection council, which concluded in a recommendation that the mine’s heritage status should be restored. She believes this was the reason for her dismissal.

But Odisharia said on Monday that the reason he dismissed his deputy was that she made arbitrary decisions and didn’t share his opinions. She didn’t work in a team at the ministry. He said the problems have grown worse lately, and he was forced to ask Prime Minister Gharibashvili dismiss her.

Odishare denied that Sakdrisi was the reason why he made such a decision, arguing that if this was the case he would have dismissed her earlier. But the minister also said Mizandari held the council session at the exact same time as a government session, without telling him.

“This is one example that she was acting arbitrarily,” he claimed. He did not say who will replace Mizandari.

According to Marine Mizandari, the culture minister asked the prime minister for her dismissal on February 5. The PM has not yet made a decision in the case.

Mizandari told Interpressnews that the dismissal letter states the reason as ‘insubordination and failure to comply with instructions.’ She also said she knew the minister was planning to dismiss her.

“He told me that if I didn’t change my views and attitude he would take measures. I guess he meant this,” she said.

Mizandari believes the root cause for the decision was disagreement over Sakdisi and the fact that she didn’t like the ministry’s staff policy. If the PM lets her stay, she is willing to continue in her job, she added.