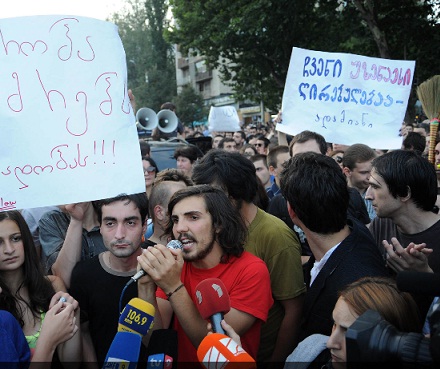 Protests continue in Georgia over the documentation of prisoner abuse; a problem known about for years, but denied by the government. Wednesday, it changed its line 180 degrees, and accepted responsibility. President Saakashvili said the prison reforms have been a complete failure, but the admission did not seem to be enough to calm people down. (IPN.)

TBILISI, DFWatch – Wednesday morning Georgia’s prison minister resigned after scandalous footage of prisoners torture was published in the media and through the internet.

Tens and hundreds of thousand have protested all over Georgia, demanding the resignation of the prison minister Khatuna Kalmakhelidze and Bacho Akhalaia, the current interior minister.

Bacho Akhalaia used to be defense minister and earlier head of the corrections department at the Justice Ministry. Lado Bedukidze, one of the sources who sent video footage to Georgian media, blames him for personally having ordering prisoner torture in Georgia.

He was repeatedly accused by the opposition of human rights violations, particularly in the prisons, and he is also believed to have provoked a riot at one of Tbilisi’s prisons in 2006, which caused the deaths of several prisoners.

But against this background, President Mikheil Saakashvili instructed the police, which is under his management now, to enter Georgian prisons and take control over them. The police entered all prisons on Wednesday.

Shortly after the president’s instruction, Deputy Interior Minister Giorgi Lortkipanidze was appointed as new head of the Corrections Department, which works with overseeing the prisons.