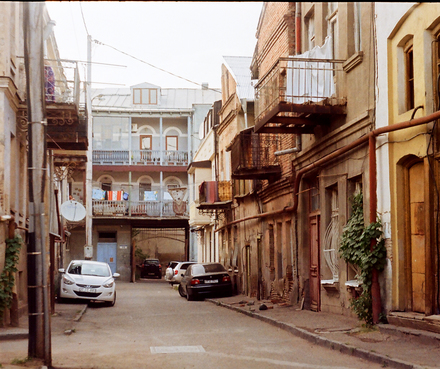 In one of the student houses on Kekelidze Street in Tbilisi, thirty students are sharing one bathroom. (DF Watch.)

TBILISI, DFWatch–At the end of Kekelidze Street, in Vake, one of Tbilisi’s most prestigious districts, there is a lane with small houses with tiny rooms.

Mostly students are living here, usually those who were born outside the capital.

They had to come here and rent a place to live while they study at the university, as none of the state universities today have dormitories.

“Finding a place to live is the biggest problem for students who come to Tbilisi from different regions. Apartments are expensive, travel is expensive, we are dependent on our parents and in the end it gets so difficult sometimes, we consider giving up our studies altogether,” a female student we will call Nino tells us.

She and her friend, who live with her in a small rented room, do not want us to write their names, because they feel ashamed of living here.

They blame Georgian mentality; living in such conditions is seen as a shame for a family. At first glance, the conditions are normal. Students are renting, split the rent on two or three persons and this reduces their expenses.

The room is tiny with even tinier kitchen. In this room, there are living three girls. One of them tells us that the biggest problem is that they don’t have separate bedrooms and if one of them has to do some homework at night, she needs the light on and the others can’t sleep well.

Another problem is that in this house, where there are several rooms rented for several people, has only one bathroom which about 20 people must share.

“You will see a line at the bathroom in the evening. In summer it gets worse. Everyone wants to take a shower more frequently and it is always busy,” says Natia, who has been living here for more than a year.

However, Natia says that she still prefers to live here, because the university is close and she doesn’t have to spend money on transport.

None of them have a stable income. Their parents, who are sending them money for living expenses, live in villages, where the income level is low.

“We are constantly looking for a job to have our own money,” Maya says. “It is impossible to pay for my studies with my job, but I mean pocket money. Recently I started working at a bookshop. They wanted to hire me full time. I couldn’t manage studying after being the whole day in the bookshop, so I quit.”

Natia has the best job among the three. She says, the second year at university, she started helping a woman with kitchen chores and she says she doesn’t have to spend much time there.

“I don’t have a high salary, but it is enough. Conditions are acceptable,” she explains.

Nino has tried several times to work as a waitress, but the shifts are inconvenient, so she has been unsuccessful so far in finding a job that suits her.

“The best thing would be if there existed a database for student jobs or maybe some other type of assistance for our employment. It is too hard for us,” Natia says.

Maya brings a cup of coffee into the room and says she knows a place where it is possible to buy delicious coffee for a cheap price.

“Some friends come here to drink coffee, but not many of them. They prefer to go to clubs. We cannot go to cafes and clubs very often. It is expensive,” Nino says, adding that it is not necessary to go to clubs to spend free time.

“Diligence is important, and then you can do everything,” she continues, and recalls how she and her friends go on trips outside the city, which is not very expensive.

The three of them study at Tbilisi State University. Two of them are from the same village and have been living together since they arrived in Tbilisi. The third girl joined them later. She was looking for a house and they suggested living together. Now they split the rent and utility fees on the three of them.

“We live normally. We have problems but I think they can be solved. Education is good and I hope to find a good job soon,” Natia says, adding that the problem is not living but ‘accepting each other.’