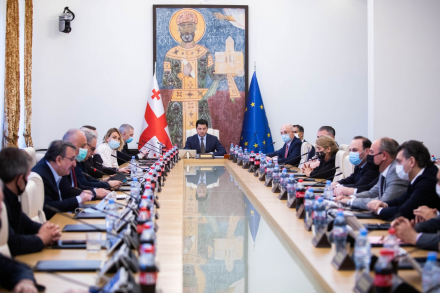 A bill drafted by Georgian Dream MPs sparked a heated debate in the parliament Tuesday, with the opposition accusing the government of curtailing certain freedoms, including freedom of movement and freedom of assembly, i.e. holding protest rallies.

The opposition suspects delivering additional rights to government may be abused in order to suppress critical voices, which is particularly dangerous in the context of impending general elections in October.

“Some parts of the bill that deal with freedom of expression, freedom of assembly, etc. are unconstitutional […]. This is a serious weapon in the hands of the government that can be abused,” said opposition MP Roman Gotsiridze at the parliament bureau meeting and dubbed the document as “dictatorship bill.”

“The bill clearly defines the conditions under which these regulations will apply. This is the announcement of a pandemic by the WHO […]. It’s only intended to protect the health of the population, especially when there is a pandemic or the spread of dangerous infections,” said GD MP Dimitri Khundadze, one of the bill signatories.

The bill gives the government rights to carry out restrictive quarantine measures during Covid-19 pandemic without declaring a state of emergency, which requires adoption by parliament. The measures include restrictions on movement, economic activity, property, assembly, labor and other rights.