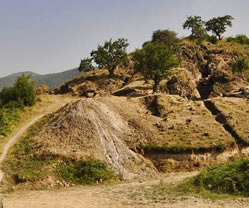 This is what Sakdrisi looked like before RMG Gold began mining there. (Interpressnews.)

TBILISI, DFWatch–The Georgian government lost its appeal in the case about lifting the protected status of an ancient gold mine in order to open for commercial exploitation.

Tbilisi City Court decided last summer that the ministry was wrong when it lifted the mine’s protected status a year earlier. Work was to be halted pending the appeal.

But in December, an agency under the Culture Ministry unilaterally overruled the court’s decision, which allowed the mining company RMG Gold to continue with mining blasts, destroying the archaeologically interesting parts of the mine.

Environmental activists attending yesterday’s hearing applauded when the ruling was read out. They were vindicated in their view, but it is unclear what is changed by the ruling, as great damage has already been done to the mine, and the public has no way of knowing what is currently going on inside the fenced off area.

Parliament earlier agreed about an inquest into the destruction of Sakdrisi, but the government coalition’s members have been dragging their feet about putting together the special commission. The issue is expected to be brought up for debate this week.

The Culture Ministry now has 21 days to appeal yesterday’s ruling, which will take the case to the Supreme Court.