Court releases pathologist on trial in connection with PM’s death

Court releases pathologist on trial in connection with PM’s death 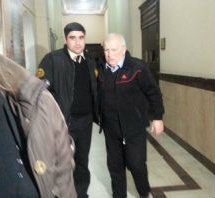 TBILISI, DFWatch–The pathologist on trial in the case about the death of Prime Minister Zurab Zhvania in 2005 has been given bail.

Levan Chachua has been in detention since March 20, but on Tuesday the court ruled that he may be released against paying a 10,000 lari (USD 6,000) bail.

Chachua is on trial for for negligence as he according to investigators didn’t completely describe bodily injuries in his autopsy report.

The reason the Prosecutor’s Office asked to place Chachua in detention was that he might ‘harass witnesses’.

Zhvania and his friend Raul Usupov were found dead on February 3, 2005, in a Tbilisi apartment. The case has been controversial as the Saakashvili government immediately explained it as an accident.

After the change of government in 2012, the case was reopened.  Important new information came to light in March this year, when photos were published that appear to show that the dead bodies of Zhvania and his friend Raul Usupov had injuries.

The official cause of death was that they died of gas poisoning due to a faulty heater, which was a common type of accident in Georgia at the time and still causes deaths.

Chachua, who has spent eight months in detention, said on Tuesday that the term of preliminary detention was ending in one month and he was therefore not surprised with the court’s decision, which he considered objective.

He said he is also interested in this process and supports the court in reaching an objective verdict.