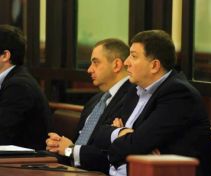 TBILISI, DFWatch–The Appeal’s Court in Georgia rejected an appeal from former Tbilisi Mayor Gigi Ugulava and he must therefore remain in detention.

Ugulava is charged with embezzlement of more than one million lari from parking fees.

His lawyers say they have exhausted all options for appeal and their client will have to remain in detention. He is being held at Matrosov Prison, where former officials can serve time under slightly better conditions.

In his comments, Ugulava derided Georgia’s justice system, which toward the end of his party’s decade-long rule was considered a success story in democratic reforms by themselves and western leaders.

“Enviable justice,” Ugulava wrote in a comment to the Appeal’s Court’s ruling. He added that the decision was made by the same judge who suspended him as a mayor without a hearing.

Ugulava further claimed that the court system is acting on orders from Bidzina Ivanishvili, the businessman who brought together the coalition currently in government.

Ugulava was detained July 3 when he was leaving for Kiev, despite having been warned by police not to leave the country. The next day, the court placed him in pre-trial detention.

Apart from embezzlement of money from parking fees, the case also deals with one instance of election fraud in the local election last month.

Also European observers believed this to be the case. One evaluation report from 2009 by the consultancy firm Scanteam wrote that the justice reforms which Norwegian experts were conducting in Georgia – a project called NORLAG – were successful and should be a model for similar reforms in other countries.