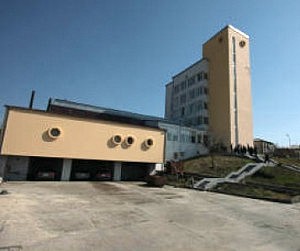 The court building in Kutaisi. (Interpressnews.)

TBILISI, DFWatch–A court in Georgia on Tuesday issued an order to detain a policeman who is accused of having caused the suicide of a 22-year-old man.

The wanted police officer Goderdzi Tevzadze has gone into hiding, and Kutaisi City Court therefore issued the ruling ‘in absentia’.

In an announcement, the Prosecutor General’s Office said Tevzadze has not left the country.

He is charged with abusing his official powers and for bringing someone to the point of suicide.

The Prosecutor General’s Office declared him wanted, and started a search involving all law branches of enforcement.

The first court hearing is scheduled for October 18 in Kutaisi City Court.

Demur Sturua (22) committed suicide on August 7 in the village Dapnari, near Samtredia. A suicide note was found in which Sturua described being harassed and threatened by Tevzadze.

The Prosecutor General’s Office said on Monday that the suicide note is authentic. August 12, Tevzadze resigned, but wasn’t arrested.

By the time he was charged on Monday by the Prosecutor General’s Office, Tevzadze had disappeared.