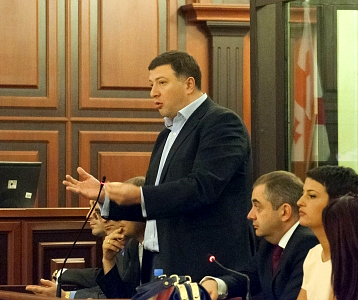 TBILISI, DFWatch–A court in Tbilisi decided Tuesday that the former mayor and Saakashvili confidante Gigi Ugulava must remain in detention.

Tuesday’s decision by Tbilisi City Court regarding Ugulava is strongly challenged by the National Movement, the former ruling party which was voted out of power by two thirds of voters in 2012.

Ugulava is one of the top people in that party, and in the public’s eye is seen as responsible for much of the abuse of power that took place during Saakashvili. He had an operative military role during the 2008 war with Russia and was a member of Saakashvili’s “inner circle”, a boy’s club that used to meet at night at restaurants like an unofficial government.

But whereas some Georgians would want to see him on trial for the things he did, others point out that procedural rules must be followed, especially in a cleanup of such historic importance.

There is no arguing that prosecutors have run up against some procedural challenges. For if they can’t finish preparations for the trial within the nine months maximum term for pre-trial detention, which expired on April 1, the suspect should be released, unless he can be charged for some other crimes.

Which is what the prosecutors have done. The charge that expired on April 1 is about the violent dispersal of an anti-government demonstration on November 7, 2007.

As this charge was about to expire in mid-March, the Prosecutor General’s Office said the episode about ex-President Saakashvili was separated from the case and that the charges against Ugulava had been made tougher. This way, Ugulava’s pre-trial detention term was reset.

Ugulava was charged with rigging a competition for a contract for regulation the parking in the capital, in favor of the company City Part. Another charge concerns putting pressure on the Central Election Commission in Marneuli, a town close to the capital with ethnic minority population, mostly Azerbaijani, during the local election in 2014.

Ugulava and members of the National Movement are accused of having insulted the head of CEC in Marneuli and accused him of being pro-government.

The court has not yet made a decision in any of these cases.

His lawyers are now working for his release and likely return to activism.