Court did not set bail for former Tbilisi mayor

Court did not set bail for former Tbilisi mayor 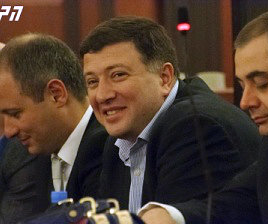 TBILISI, DFWatch–Tbilisi City Court on Wednesday decided not to set bail conditions for former Tbilisi mayor Gigi Ugulava, who is charged with embezzlement of more than one million lari from parking fees.

The court did not agree with a request by the Prosecutor’s Office to set a 50,000 lari (USD 30,000) bail for Ugulava and take away his ID and passport due to the flight risk until he can face tried for new charges presented on Monday.

Ugulava’s lawyer denied that there is a flight risk because his client has been in court many times and has never run away from trials or investigations.

The Prosecutor’s Office plans to appeal the city court’s decision to the Appeals Court. Next hearing in the case will be held on August 14.

After the hearing, Ugulava said he plans to get a ticket to Moldova and go there only to show the government that he can leave the country and return and that he won’t run away from the investigation and the trial.

He said this is his fourth charge and the government will probably introduce more charges, but today was a first time he felt insulted, because of the claim that he was planning to run away.