TBILISI, DFWatch – The popular newcomer in Georgian politics was promptly denied having his citizenship restored today by a Tbilisi court, thereby seemingly blocking his progress towards power in the country.

Tbilisi City Court ruled against repealing a presidential decree of October 11 which took away Bidzina Ivanishvili and his wife’s Georgian citizenship. The court’s ruling came during solicitation and before the case had got as far as discussing the main arguments.

President Mikheil Saakashvili issued a special decree three days after the businessman launched his campaign, taking away his citizenship and thereby making it illegal for him to enter politics in the country. On October 21 the decree was taken to court in an attempt at getting the decision annulled.

“…Because [the decree] was inherently harmful to the interests and legitimate rights of Bidzina ivanishvili and Catherine Khvedelidze,” Ivanishvili’s lawyer Shalva Tadumadze explains.

Tadomadze says he will appeal the ruling to the Appeal Court within the 12 day term. After that it could go to the supreme court.

In other developments, it was announced that stones found on Mr Ivanishvili’s Moscow representative as he was arrested on arrival at Tbilisi airport Saturday, were not a danger to public health, according to the Internal Ministry.

The ministry released Levin after a few hours, saying they had acted on operative information that the stones were radioactive materials that the detainee was trying to smuggle into the country.

In fact, the stones were minerals which were included with several editions of a magazine called “Stones’ Energy” which Levin was carrying in his luggage. The niche magazine for mineral collectors is published in Russia, Ukraine and Kazakhstan and costs around ten Georgian lari.

Levin explained afterwards that these magazines were a present for Bidzina Ivanishvili’s daughter. A statement from the businessman’s press office says that his daughter has been a mineral collector for years.

According to Levin’s lawyer, Shalva Tadumadze, his client has not been questioned, and has neither witness status nor status as suspect. 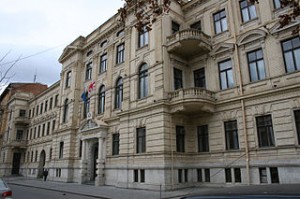