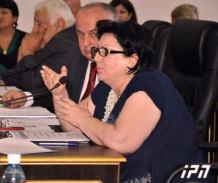 TBILISI, DFWatch–There was further infighting in Georgia’s government coalition  on Thursday as a member of the council in the Adjara region accused a local finance official of corruption.

The accusation was put forth as the official, Davit Baladze, September 18 briefed the council about the spending of this year’s budget. After giving an overview of the first two quarters of the year, he noted that so far, the government has spent about 50 percent of the 2014 budget.

According to her, the authorities have already started an investigation into alleged corruption by the current Adjara government.

Baladze denied the accusations and said that these accusations emerged when certain people got fired. He told that he is ready to be held responsible, if any corruption is proven.

Vasadze’s accusation is further proof of splits within the coalition that is currently in power in Georgia, and one more episode in a long-running battle in Adjara between different groups inside Georgian Dream. She belongs to a part of the coalition that are supporters of the vice speaker of parliament, Murman Dumbadze, who was expelled from the coalition.