Continued speculation about who should sign Georgia’s EU treaty

Continued speculation about who should sign Georgia’s EU treaty 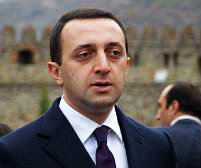 Georgia’s treaty with the EU will be signed by Prime Minister Irakli Gharibashvili, although he is not head of state. Will that make the treaty invalid? (Interpressnews.)

TBILISI, DFWatch–When Georgia signs an association agreement with the European Union in late June, it will be Prime Minister Irakli Gharibashvili who will do the signing.

This is despite it clearly being stated in the constitution that the president is the one who signs international treaties.

The subject of who will sign the AA has become controversial in Georgia lately, because of speculation that there is a secret confrontation between Gharbiasivli and President Giorgi Margvelashvili, two favorites of billionaire Bidzina Ivanishvili.

The government’s parliamentary secretary Shalva Tadumadze Friday admitted that according to the constitution, the Georgian president represents the country in foreign relations, negotiations with other states and international organizations, but according to article 73 he needs the agreement of the government.

Tadumadze explained that the president would have the right to sign a AA if he had conducted the negotiations.

“Considering that according to article 73 of the constitution, the President of Georgia didn’t conduct negotiations with EU, by the current legislation, he doesn’t have a right to sign the Association Agreement without the government’s agreement and without countersignature by the prime minister in the future,” Tadumadze explained.

Nonetheless, the Georgian constitution says the president should sign international agreements, being the head of state. He needs approval by the prime minister, who is head of government, in order to sign agreements.

Ex-PM Bidzina Ivanishvili, who still has great influence, about two months ago confirmed rumors that he and his former close associate, Giorgi Margvelashvili, have had a falling out.

This is surprising because Ivanishvili picked Margvelashvili as candidate for president. He recently admitted he was mistaken about Margvelashvili and even said that he hasn’t made such a mistake in his whole career.

Later in a TV interview Ivanishvili praised his other close associate Irakli Gharibashvili, whom he picked as his successor.

When the French president recently visited Georgia, a dinner was held at the president’s palace, which Gharibashvili didn’t attend, and this was seen as an expression of their falling out.

The prime minister’s office declined to comment why the PM didn’t attend and some perceived his action as a show of disrespect toward the guest.

Later, in order to overcome these rumors, the president and the PM released a photo from a dinner they had together, but it was met with an ironic response among people.

When it comes to the signing of the EU agreement, the Georgian constitution says the president “concludes international agreements and treaties, negotiates with foreign states; appoints and dismisses ambassadors and other diplomatic representatives of Georgia with the consent of the Parliament; accredits ambassadors and other diplomatic representatives of foreign states and international organizations.”

This indicates that uniting the state in any type of organization is the prerogative of the president, as he is the head of state. No other person can sign such a document, because it will call the legitimacy of the document into question.

However, it seems that the president doesn’t want to create tension with the prime minister, who has a great deal of support from Ivanishvili. A few days ago, Margvelashvili said in an interview that he thinks the president should sign the document, but the most important thing is to sign it, and it matters less who signs it.