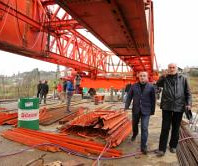 TBILISI, DFWatch–A construction worker died on Tuesday during work on a bypass road near Kobuleti in western Georgia.

The 40-year-old man is said to have fallen from a 20-meter tall bridge and died from multiple injuries.

An investigation has been launched pursuant to article 240 of the Criminal Code about violation of safety rules during construction work leading to death.

A representative of the Chinese company Sinohydro, which is building the bypass, told journalists that they do not have any theory as to what might have caused the accident. The worker was wearing a helmet and a safety belt, the spokesperson said.

Badri Gagaishvili, a lawyer for Sinohydro, told Interpressnews that the construction was not damaged and it is unclear why the accident might have happened.