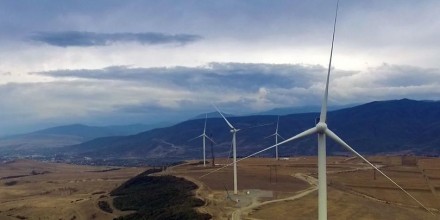 National Association of Energy and Environment

TBILISI, DFWatch–Construction work on Georgia’s first wind farm has been completed near Gori, the Energy Development Fund of Georgia announced.

The facility consists of six turbines, each with a power output of 3.45MW.

Before going online, the wind farm will go through a testing phase in October and November.

In 2014, Georgia signed an extensive trade deal with the European Union called an association agreement which includes provisions requiring Georgia to research and use renewable energy.

The following year, Georgia announced a tender to construct a wind farm. Construction work started in February this year.

The facility has cost USD 34 million. USD 24 million of this comes from the European Bank for Reconstruction and Development (EBRD); the rest from Georgian Energy Development Fund and Georgian Oil and Gas Corporation; the two co-owners in KWPS.