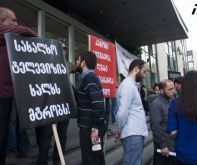 TBILISI, DFWatch–A group of conservatives demonstrated outside the Georgian Public Broadcaster on Monday, demanding that the TV program Red Zone is closed down, after it dedicated its Saturday show to homophobia.

May 17, the International Day Against Homophobia, was marked by conservatives, priests and their followers by rallies against gays, lesbians and other sexual minorities and showed their discontent with a new anti-discrimination law recently adopted by parliament.

They were answering a call from Georgia’s most influential person, Patriarch Ilia II, to make May 17 a day of Family Values.

The following days, others expressed their solidarity with sexual minorities in different ways, like installations in the streets, and spreading notes with different messages.

Saturday evening, Red Zone was dedicated to homophobia. In the discussion part of the program, anchor Gogi Gvakharia spoke to human rights activist Eka Agdgomelashvili from the Women’s Initiative Support Group about homophobia.

After the discussion, the short films Pierre Pinaud’s ‘Early Frost’ and Lia Jakeli’s ‘Mother, Father, I am Gay’ were shown.

The GBP management responded in a written statement saying that they do not interfere with the editorial independence of the TV program, which is produced based on a contract between GPB and Radio Liberty. Red Zone is live at 22:00 every Saturday with a film in the end of the discussion.

The statement reads that the person in charge of the program decides the topics and content and choses the films. The contract with Radio Liberty ends on August 1, 2014.