Conservatives rallied against gay rights on May 17

Conservatives rallied against gay rights on May 17 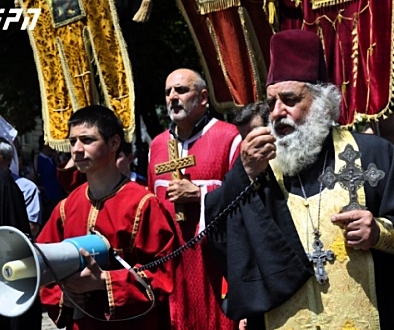 The Georgian Orthodox Church organized many events to mark its non-acceptance of homosexual lifestyle, which it considers a sin. (Interpressnews.)

TBILISI, DFWatch–The International Day Against Homophobia was in Georgia transformed into a day of family values, which was the initiative of the country’s most influential person, the Patriarch.

A number of rallies and events were held on May 17 against LGBT people and against the anti-discrimination law.

People marked it as a day for showing respect for parents, as the Patriarch requested a few days ago. No rallies in support of LGBT people were held on Saturday. Rallies went on without any major incidents, however there were several minor confrontations in the streets.

Orthodox priests and their followers gathered at Tbilisi Event Hall at 10:00 in the morning, bringing huge posters like “A man can never be called wife”, “May 17 is a day of family values”, “Nation against Satanism”, “homosexuality is sin and pathology.”

Many people brought their families to the rally. Priests brought holy water to bless the streets and participants at the demonstration all the way to Trinity (Sameba) Cathedral, where Patriarch Ilia II conducted a prayer. People congratulated each other with the day of family values. Eastern chants were heard during the day.

Among the demonstrators there were seen several politicians like Nino Burjanadze, Dimitry Lortkipanidze and Jondi Baghaturia. Police was mobilized in the streets.

Some Orthodox Christians launched a petition on Saturday to remove ‘sexual orientation’ and ‘gender identity’ from the recently adopted anti-discrimination law, as in their opinion, the law makes propaganda for ‘incorrect orientation.’ Signatures will be collected for five days.

Before the beginning of his prayer, Patriarch Ilia II said May 17 is an important day, as children respect their parents, or pay tribute and commemorate to their dead parents.

Rallies continued at the former parliament building in Tbilisi where people came to protest against the anti-discrimination law, but some of the people who addressed the rally spoke about other issues like electronic ID cards and passports, which in their opinion is ‘from Satan’ and people must have the option not to have electronic documents.

Participants at the rally criticized the government for ‘anti-statehood actions’ as they allowed the adoption of the anti-discrimination law.

During the rallies, there were several incidents, as some people thought a young guy dressed in a colored shirt might be a representative of a sexual minority. They started shouting, but the police defused the situation. Later some people attempted to block car traffic on Rustaveli Avenue and were detained for administrative violations.

In the evening, youth were involved in a verbal confrontation on Rustaveli, as one group thought a guy was a representative of a sexual minority and started shouting, but police escorted the guy to a safer place.