Confusion over election math: Will Georgia’s third party get into parliament?

Confusion over election math: Will Georgia’s third party get into parliament?

TBILISI, DFWatch–There is confusion over how to interpret the results of Saturday’s election in Georgia. A CEC spokesperson said Monday that the third party Alliance of Patriots is still below the threshold, but even so, the commission will discuss if it may still be qualified with 4.998%. 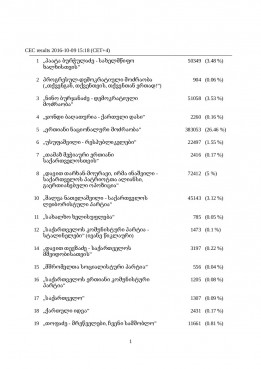 How the CEC results changed over time. Note how Patriotic Alliance was listed at 5% (with no decimals), while the percentage of other parties and lists was given with one or two decimals. (Click on image to view.)

Alliance of Patriots has been hovering around 5% since Sunday, with less than a hundred votes margin.

The official results page of the Central Election Commission (CEC) gave the party’s share of votes as exactly 5% – with no decimals – while the percentage of other parties was given with an accuracy of one or two decimals (see right). As a consequence, the third largest party seemed to be above the 5% threshold at times when in fact it wasn’t.

Explaining the mystery at around 4pm Monday, CEC spokesperson Ana Mikeladze told journalists that by 15:00 on October 10, the Alliance had 88,132 votes, which was 4.998%.

“The program automatically rounded this result, as it has to stop at some point, it is elementary math. But now, the election administration will discuss whether 4.998% percent is enough, so that the party was able to surpass the threshold, if the results won’t change,” she said.

Mikeladze added that CEC has 19 days to publish final results. There are some complaints which have to be considered and the numbers may therefore change.

Mikeladze announced an hour earlier, around 3pm, that the Alliance of Patriots had 5%, and the official results webpage was later updated, showing the party 56 votes above the limit.

But in that statement, the CEC spokesperson also warned that these were not the final results.

As 99.92% were counted, the total number of votes appeared to be 1,762,402, based on the official CEC results page. This would mean that in order to reach five percent, a minimum of 88,121 votes were needed. Alliance of Patriots was listed at that time as having 88,177 votes – 56 more than required.

DFWatch previously reported, Alliance of Patriots was on the verge of surpassing the five percent threshold Sunday night and Monday morning, with results showing them sometimes in, sometimes out, by less than a hundred votes.