Competition watchdog must do more with same budget

Competition watchdog must do more with same budget

Government wants to reform the antimonopoly service and give it new tasks. But its budget is to stay the same next year. Experts think it’s doubtful whether there will be any real change in how the service operates, which the European Union is demanding from Georgia. 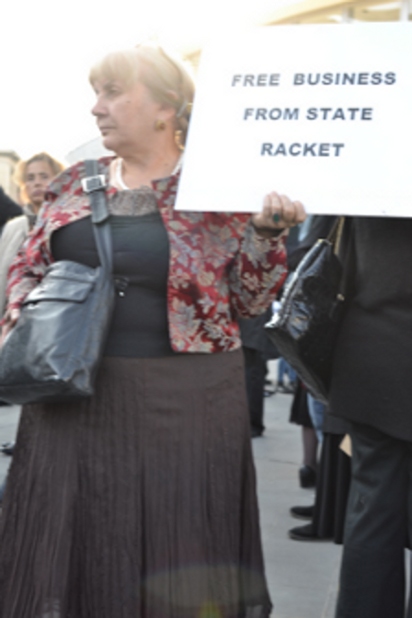 Only 15% of business turnover was in the hands of small and medium size businesses in 2010. Ten years before it was twice as high. The lack of competition in Georgian markets results in higher prices, lower quality and unfair practices.

A well-functioning antimonopoly service is the most important among several conditions to be met before negotiations can start to sign a free trade agreement between the EU and Georgia. That was the reason the government decided to establish the service in Spring 2010. At first, the service was set up but its functions were not defined. The government then promised that a special bill would be worked out in the near future. Only now has this condition been met by the draft new law on Free Trade and Competition now awaiting review by parliament.

The draft is quite long, and outlines the functions of this service and what areas will be regulated.

“The Law defines the principles of protection from unlawful restraint of free and fair competition. This creates the basis for the development of free trade and competitive markets.” – The bill says.

“The law is aimed at ensuring free trade and competition in Georgia, namely: a) to promote the development of free enterprise and competition; b)In order to facilitate market liberalization, administrative, legal and discriminatory barriers from the state agency or local government,to enter the market; c) guaranteed conditions for economic agents to ensure free access to market; d) Prohibition of unlawful restriction of competition between economic agents; e) Protection of complete equality among economic agents during work; f) Prohibition of exploiting a dominant position; g) Prohibition of a state agency or local government agency to grant economic agents exclusive authority, which unlawfully restricts the competition; h) Maximum publicity, objectivity, nondiscrimination and transparency of the authority’s decision-making,” the bill states.

The new law states that the agency is authorized to take offendants to court in case it discovers violations. The court will then decide whether to force the company to stop its activities. The law also defines special fines for various violations.

The current law does not define any functions for this service. But the new law outlines what human and financial resources are needed to transform the service into a true watchdog which is able to constantly monitor the market.

But this issue is not reflected in the budget of 2012. This means that the reformed antimonopoly service probably won’t get increased funding.

In 2011, 180 thousand GEL was allocated for the Free Trade and Competition Agency. 130 thousand of it was spent on salary for the 9 people working there.

For next year, the agency will get the same — 180 thousand GEL, according to the new budget. The number of workers does not change, but the annual expenditure for salaries will be cut to 126 thousands.

Although the bill has not been through parliament yet, it’s obvious that the government had information about the reforms of this service. So if it was really planning to fulfill the EU’s commitment, this ought to be reflected in next year’s budget. That’s why experts DFWatch has spoken to think it is highly doubtful whether there will be real change.

“The Free Trade and Competition agency must join the State Purchasing Agency, according to the new law now being considered by parliament. It’s not reflected in 2012 year budget but it’s already clear that funding for competition regulatory agency will not increase for next year. It makes it doubtful whether it will be able to realize the institutional strengthening and effective functioning of this body. Furthermore, the state purchasing law enforcement will be added to its functions in the future,” Merab Kakulia, legal expert in economic issues says.

“We haven’t reviewed this proposal yet. Why the hurry? We will answer all questions when we begin discussing the issue” –Zurab Melikishvili, chairman of parliament’s Finance-Budget committee.

The government does not want to comment on the issue.

“We haven’t reviewed this proposal yet. Why the hurry? We will answer all questions when we begin discussing the issue,” says Zurab Melikishvili, chairman of parliament’s Finance-Budget committee.

He failed to answer DFWatch’s question if it is necessary to increase the funding for the antimonopoly service, considering that its obligations will be expanded.

“The budget draft is under consideration and I won’t make additional comments on this issue yet,” Melikishvili added.

The lack of increased funding therefore is no mistake. The bill itself actually states that the watchdog won’t need additional funding. It’s an open question how it will be able to take on new functions. Except, of course, if fulfilling the commitment to the EU only means adopting this law, not making the agency able to do its work.