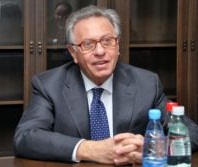 Before he left Georgia, Buquicchio held a press conference to sum up his stay and his meetings with the president, the prime minister, the speaker of parliament, the justice minister, parliamentarians from both the National Movement and the Georgian Dream coalition, as well as civil society representatives and chairs of the supreme and constitution court.

The Council of Europe official said he is pleased with the Georgian government’s wish to strengthen relations with the Venice Commission. Buquicchio said the commission is ready to appoint a liaison officer to Georgia, as the government plans to start a process of reviewing the constitution. The envoy will get involved in this process and connect Georgia to the commission.

The Venice Commission president said there is a pressing need to improve the Georgian constitution, but added that changes shouldn’t be hurried. They should be made after there is a broad consensus in society.

In February, Georgian Dream plans to set up a commission which will work on constitutional reform.

He said, at first there were some concerns that the foreign policy orientation of Georgia might have changed with the new government. But after his two-day visit and meetings, no one gave any indications that this is true. Everyone said that the course towards Euro-Atlantic integration continues, as it is the wish of 75 percent of the population, and he, as a European, supports it as well.

The Venice Commission president also spoke about an amendment to the law on the High Council of Justice. This is one of the issues on which the Georgian government asked the Venice Commission for their recommendations and parliament is awaiting that reply.

Read more about the bill: https://dfwatch.net/how-ivanishvili-will-reform-georgias-courts-71890

The Venice Commission president considers this reform a positives step. He said the High Council of Justice should be independent and it will be a self-governed body of judges, together with scientists and civil society representatives, while judges should be elected by secret ballot.

Buquicchio appealed to all players in Georgian politics to make an effort to ‘cohabitate’ and have a sense of fair play – opposition, majority, society and media.