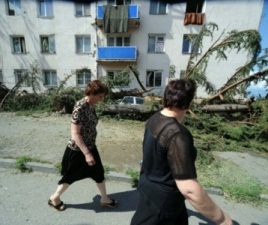 Cleanup work has started in Georgia's eastern region Kakheti after the latest storm there August 19. Another storm struck near Tbilisi Monday evening. (IPN.)

TBILISI, DFWatch – Another cleanup effort has started in villages in the east of the former Soviet republic of Georgia following another hailstorm. Meanwhile, people reeling from the losses after the last storm, which caused massive damage.

Thousands of houses were flooded after heavy rain and storm in Kvareli and Lagodekhi, in Georgia’s eastern region Kakheti. Houses are left without roofs in villages near the town Gurjaani.

The local emergency service are working in emergency mode, noting that the extent of the last storm was not the same as on July 19; however there is serious damage in some villages.

Cleanup work started Tuesday morning. Employees from the defense ministry are clearing the streets of fallen trees. Local media report that there are more than a hundred appeals for assistance in the small village Chumlaki. A vineyard and a cornfield are destroyed.

The population says the grape harvest must start immediately, or else the grapes will rot.

“Brigades are mobilized in Gurjaani and other regions. They are helping to cover the roofs of houses,” Environment Minister Goga Khachidze said today while visiting affected villages.

“If we haven’t reached some affected families, don’t be nervous we will go everywhere and everyone will receive compensation,” he added.

The defense ministry today released a short statement saying that employees of the ministry yesterday evening were taking part in the cleanup work. The engineer battalion of Georgia’s armed forces has been deployed with machinery to the disaster zone. They are to stay there until the cleanup work is completely finished.

Interpressnews quotes the energy distribution company of Kakheti saying that 37 000 clients are left without electricity, mainly in Gurjaani, Sagareko and Lagodekhi.

The hail caused 40 percent destruction in 460 acres of vineyards and vegetable fields.

Monday evening, another storm hit the town Rustavi, 20 km south of Tbilisi. Most of the streets were flooded and traffic was suspended. One apartment block is roofless, while windows were broken in another block. Yesterday’s storm also involved hail, and lasted twenty minutes. Rustavi City Hall has started calculation the losses.

A government session was held today at Tbilisi City Hall. They decided to allocate nearly 2 million lari from their reserve funds for those affected by the storm.

Tbilisi City Hall conducts calculation of losses in these places. So far there is information that about 203 have been affected in the Didgori district of the capital, and 163 in Isani-Samgori.