Clashes in Tbilisi for and against Crimea referendum

Clashes in Tbilisi for and against Crimea referendum 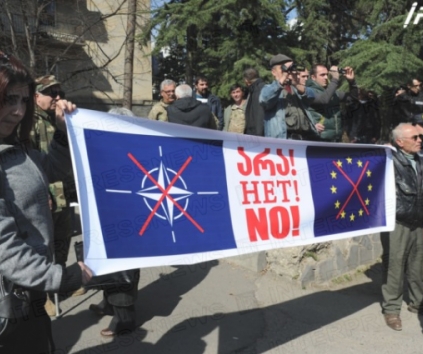 TBILISI, DFWatch–Supporters and opponents of the referendum in Crimea clashed in Tbilisi Sunday.

A group called “Eurasian Choice” tried to hold a demonstration on Cholokashvili Street in front of the old Russian embassy building at 15:00, but were pushed away by the more numerous pro-Saakashvili “Free Zone” activists.

Police had to separate the two crowds and two of the “Free Zone” activists were detained, one of them for tearing apart a banner belonging to the Pro-Russia group. The two were detained for administrative violations and were later released. 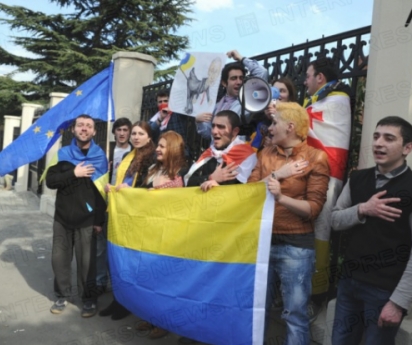 A correspondent for Kavkaz Uzel describes the disagreement as broadly speaking between supporters of Russia and supporters of the new government in Ukraine.

Palitra TV posted a video in which one from the pro-Russian side explains why they demonstrated.

“We want the Georgian people to know what is really going on in Ukraine. What is happening in Ukraine is against the interests of the Ukrainian people. What happened in Kiev in February was a revolution carried out by armed groups encouraged by the United States and EU.”

One of their banners read “Crimea is Russia”. Another one said “Georgian Peace Committee”; the name of a group which claimed during the Russo-Georgian war in 2008 that the Saakashvili government was fully responsible for that war. In the Palitra video, pro-Saakashvili parliamentarian Akaki Minashvili can be heard shouting “traitor!” at one of the pro-Russian demonstrators.

National Movement, the party of former President Saakashvili, has criticized the Georgian Dream government for having a ‘soft’ policy towards Russia which they think has encouraged pro-Russian views.

One National Movement member, Givi Targamandze, said it was unfair of the police to only detain anti-Russia activists on Sunday.

“There can be all kinds of people in a free society, including infamous people, people with infamous views, but they will never gain the initiative in this country,” said another of the party’s public faces, former National Security Council Secretary Giga Bokeria.