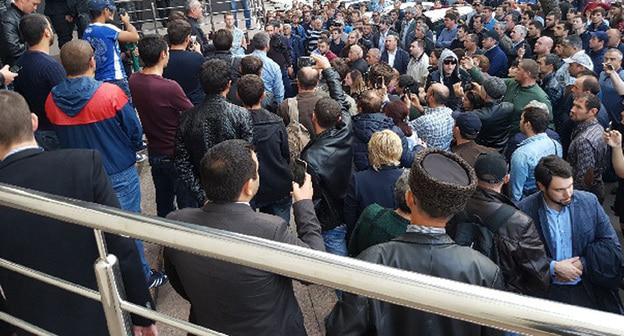 Abkhazians hold a rally in solidarity with Ruslan Gvashev in Sokhumi. (Anaid Gogoryan/RFE/RL.)

TBILISI, DFWatch–In southern Russia’s Krasnodar region, Circassians, Abkhaz, Adyghe, Kabardians and Shapsughs continue to protest against the persecution of a 67-year-old activist regarded as a national hero and the most prominent civil rights worker.

The protests began after Ruslan Gvashev was fined 10 000 rubles (USD 170) for ‘extremism’ after he organized a mass prayer on May 21, a day of remembrance for Adygians, Circassians and Abkhaz. That’s when they mark the events of May 1864, when hundreds of their forebears and other highlander peoples were either massacred or driven out of northwestern Caucasus by tsarist Russia.

Traditionally, on May 21 they visit a large saddle tree in the village of Golovinka, near Sochi. The tree is regarded as sacred by Circassians and every year activists go on pilgrimage to the site to pay tribute to the victims, an act frowned upon by Russian authorities.

This year, the pilgrims were raided by police and thrown out. Some were arrested, including their leader, Ruslan Gavshev.

He was soon released from prison, but on June 2, the Sochi court ruled that the sermon was “an act of extremism” and fined its organizer. The decision was appealed to the Krasnodar district court. On September 11, Gvashev began a hunger strike. Since then he’s become a major factor throughout the western Caucasus.

Rallies on his support were held in Krasnodar, Sochi, Sokhumi and other places with significant Circassian and Abkhaz population. The activists vow to carry on their protests to the end.

Gvashev, a veteran of the war in Abkhazia who lost a leg during that war, continued his hunger strike until October 5, the day when an appeals court in Krasnodar was to review his case, and called it off after his condition worsened and protesters gathered at the courtroom asked him to stop.

The court postponed its review of the case till October 16. Circassian activists are waiting for that day. They vow that if the court doesn’t rule in favor of Gvashev, they will launch larger protests.

Ruslan Gvashev, an ethnic Shapsugh, is president of the Shapsugh council of elders, an informal yet influential institution among Caucasian highlanders. Shapsughs represent a minor sub-group of a wider Circassian ethnicity, along with Adyge, Kabardians and Circassians themselves. Together with Abkhaz people and several other minor subgroups, Circassians form a larger ‘super-ethnicity’, all of whom speak different yet related Northwest Caucasian languages. All of these ethnicities are predominantly Sunni Muslims, except Abkhaz, who are Eastern Orthodox Christians. However, their religions are strongly influenced by various paganistic beliefs.

Ruslan Gvashev is highly respected in Abkhazia and decorated with several prestigious orders, including the Order of Leon, for his active involvement in the war in Abkhazia in 1992-93. He was one of the key persons in mobilising volunteers from North Caucasus to fight Georgian troops and played a crucial role in the outcome of that war. There is also much evidence of war crimes committed by volunteers from North Caucasus.