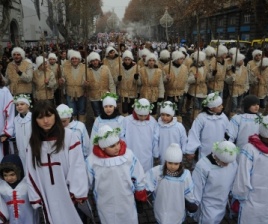 The Christmas procession Alilo is held every year on January 7. (Interpressnews.)

TBILISI, DFWatch–January 7, Georgia marks Christmas according to the Julian Calendar and as customary the large Alilo procession was held in the capital.

Clerics and parishioners on Tuesday gathered at Roses Square to prepare to walk along Rustaveli Avenue and end the procession at Sameba Cathedral, which is the largest church building in the country.

On the way to the cathedral, Alilo participants perform different chants and collect sweets, toys, fruits and clothes which are then given to socially vulnerable families.

Alilo is usually organized in every region, village, district and borough in the country.

In Tbilisi, there are theatrical elements in the procession: Children dressed as angels with shepherds and clerics lead Alilo in the font with buffalos and bulls.

On the way to the cathedral, Alilo will stop in front of the old parliament building on Rustaveli, where the speaker and other members of parliament will give sweets and fruits and say Christmas greetings to participants.

The next stop is the City Council, as well as the Patriarchate, where Patriarch Illia II will also meet Alilo participants and give them his blessings.

Alilo will end at Sameba Cathedral.