Christians and Muslims in Adigeni agree to share cemetery

Christians and Muslims in Adigeni agree to share cemetery 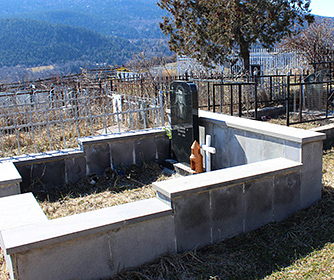 TBILISI, DFWatch–Muslims and Christians have reached agreement about a cemetery in a village Adigeni, in the south of Georgia, after a tense standoff.

The communities agreed to have one common cemetery, which will be separated by a line.

Jambul Abuladze, head of the mosque in Chela, a nearby village, tells us that on the Christian cemetery there is an empty area which will be used by Muslims and be surrounded by a line. Each section will have a separate entrance.

Abuladze says that certain details still have to be agreed with Christians, for example how to avoid misunderstandings and insults during religious rituals.

The conflict started on Monday with verbal and physical clashes when local Muslims were discussing with local municipality the possibility of allocating space in the village for a Muslim cemetery. A group of Christians attacked them and three Muslims were injured.

They were against setting aside a separate place for Muslims, claiming that this would lead to Christians being resettled. Part of the background is that two old mosques in Adigeni are being restored.

The village currently has only one cemetery, which is used by Christians. Muslims have had to bury their dead in another village. Now, the Christian cemetery will be enlarged so that Muslims can bury people there as well.

Muslims explained that they have different rituals and they cannot bury their dead at the Christian cemetery. Christians have crosses and bring alcohol to the graves, which is unacceptable for Muslims.

Abuladze explained that no-one is planning to build a mosque there.

Tariel Nakaidze, Head of the Georgian Muslims’ Union, believes that the government inspired the conflict in Adigeni. As an example, he told us that on Monday, the administrative head of Adigeni – the ‘gamgebeli’ – was passively standing by while Muslims were beaten in front of him. He also claims that the head of the local police department has made disparaging remarks about Muslims and actually encourages inter-religious tension.

DF Watch could not reach the Ministry of Internal Affairs for comment.

Zakaria Endeldadze, the gamgebeli of Adigeni, rejected the allegations. He says it was a small clash, a squabble, which soon passed.

“Thanks to God’s blessing, there is now perfect peace in Adigeni.”

He believes that there is no conflict between Christians and Muslims in the village, but some ‘enemy forces’ brought tension, and points out that the cemetery issue now has been solved.

Since the clash on Monday, law enforcement bodies have been protecting the village. The Prosecutor General’s Office has launched an investigation into what happened.

But Muslims are not hopeful that the government will punish the people who attacked them. Nakaidze tells us that there have been similar cases in the nearby villages Chela and Mokhe, but no-one was punished after those incidents.

“People were only questioned. No-one was charged. 70 people witnessed this fight and we know the names of the attackers, but what are the investigators doing? Everybody knows that no-one has been arrested or fined, just like before.”

There are about 80 families living in Adigeni. 20 of them are Muslim families from the Adjara region. They have been burying their dead at a Muslim cemetery in Zanavi, a nearby village.