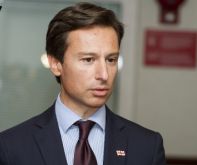 Targamadze, a former TV journalist, said at a press conference on Saturday that he made the decision after the presidential election. He didn’t specify what his future plans are but said he may go back to working in the media.

He also said that there are consultations with different political parties, but he doesn’t participate in them. Journalists asked him whether it is possible that the Christian Democratic Movement might form a coalition with Nino Burjanadze’s party; he said ‘why not.’

“When we talk about uniting the non-parliamentary opposition, first of all these are parties which actively function today, have some weight, rating and influence,” Targamadze said, continuing that it is possibility to create a second alternative choice, where there will be Christian Democrats, Democratic Movement and other parties.

He then explained that the reason why he is leaving politics is the results of the last presidential and parliamentary elections.

A couple of weeks ago Nino Burjanadze also spoke about the possibility of creating a coalition for the local elections in June.

Targamadze used to be host of the popular program “Droeba” on Imedi TV. Then he went into politics and joined the Christian Democrats. He was joined by Inga Grigolia, another well-known Georgian journalist. The latter recently left the party and returned to being a journalist.

Giorgi Akhvlediani will be acting leader of the Christian Democrats party.